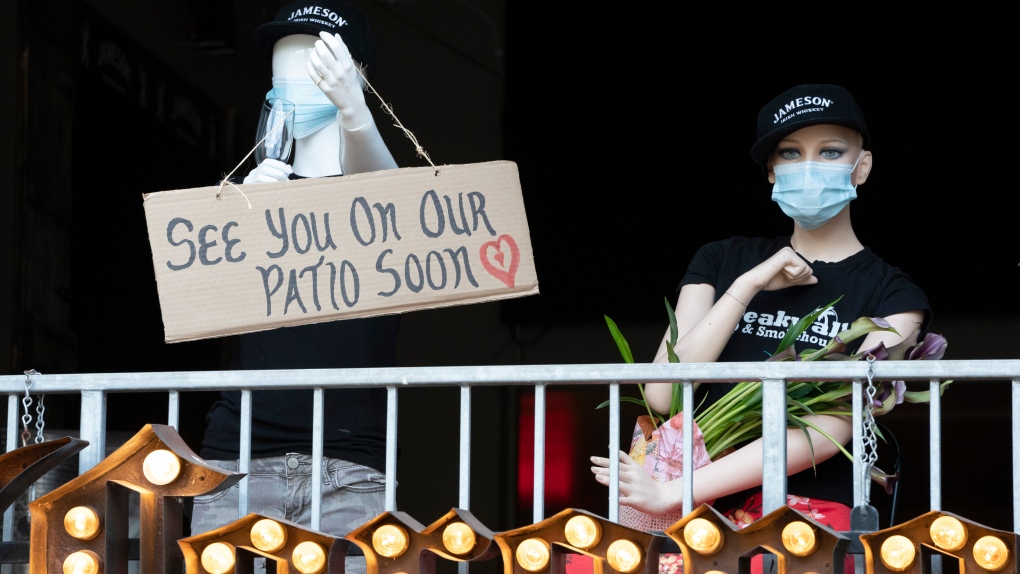 Mask wearing mannequins wait for patrons on a patio in Toronto on Thursday, June 18, 2020. THE CANADIAN PRESS/Frank Gunn

TORONTO -- Mayor John Tory says he is "very optimistic" that Toronto will be given the green light to move to the second stage of the province's reopening plan this week.

Speaking to CP24 on Sunday, Tory said it appears the city is "achingly close" to being able to reopen additional businesses, including restaurant patios and hair salons.

"I think it is going to happen this week. That's my own prediction and it is not based on an inside secret," he said.

"I just think the numbers have headed strongly in the right direction consistently now for two weeks and so I think everybody now is going to be in agreement that it is time."

Due to a higher number of active COVID-19 cases, Toronto, Peel Region, and the region of Windsor-Essex were held back from moving to the next stage of reopening.

The province has seen a decline in case growth over the past week, with several consecutive days of fewer than 200 new cases of the virus reported.

Premier Doug Ford is expected to make an announcement tomorrow about whether Toronto can move on to Stage 2.

"We are close so let's not mess it up," Tory said Sunday. "Let's let the city reopen and make sure we follow the rules after that."

Tory said he has been speaking to the premier regularly about when Toronto can reopen.

"I am very optimistic," Tory said. "I talk to the premier about this continuously (and) had a long chat with Minister Rod Phillips about all of this yesterday as well."

He warned that when more businesses reopen, people must continue to follow public health restrictions put in place to slow the spread of the virus.

"We just have to then make sure that we stay the course and don't assume that it is kind of time to start huddling together on the beach and being in big crowd scenes," he said.

"We could have a return to all of this and I don't think any of us want that."