Toronto now has a Raptors Way.

Ahead of the defending champions’ home opener on Tuesday night, a new street sign was officially unveiled by the team’s mascot and Toronto Mayor John Tory.

The sign was unveiled at a pre-game celebration outside Scotiabank Arena at Jurassic Park, the designated fan zone for Raptors fans.

"We had to fix it because it sounded kind of lame to say you could go down to Jurassic Park at Bremner Boulevard,” Tory told a crowd gathered for the celebration. “We couldn’t put Jurassic Park up there because tourists may think they will be eaten by dinosaurs. So what we did was renamed this part of the street, it’s Bremner Boulevard, but it’s also Raptors Way.” 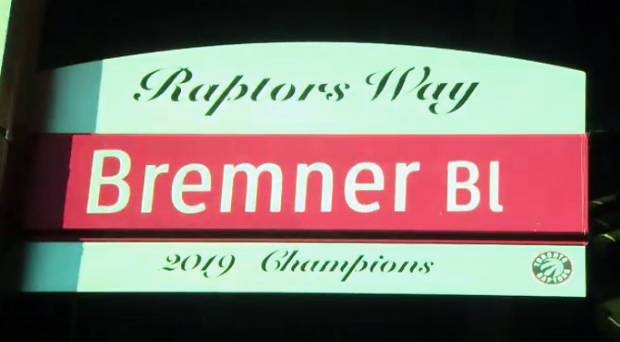 Tory said earlier in the day that the sign is going to be permanent.

Inside the arena, fans witnessed the raising of the championship banner to the rafters, as well as championship rings being handed out to players, coaches and front office staff.

“Such a special night,” he said to a roaring crowd inside the Scotiabank Arena. “We want to thank all you fans in this great City of Toronto and this country of Canada. We wouldn’t have been able to do this without you guys.”

The veteran core of the Toronto Raptors is back from their championship season, but Kawhi Leonard and Danny Green left in free agency.

Throwing it back to last season’s historic #NBAChampionship run for our @Raptors. I look forward to joining fans across the country in celebrating the start of the 2019-2020 season with the Raptors' home opener tonight. #WeTheNorth pic.twitter.com/pGILSmXza2

Mayor will not be wearing Raptors jacket during regular season

The mayor added that he will not be sporting his well-known black and gold Raptors jacket as it is reserved for the playoffs.

“I will be looking forward to donning it again, I’m sure it’s going to bring good luck again but in the meantime it will not be worn by me or anybody else.”

Tory has leant the jacket to Maple Leaf Sports and Entertainment to be put on display in the arena. 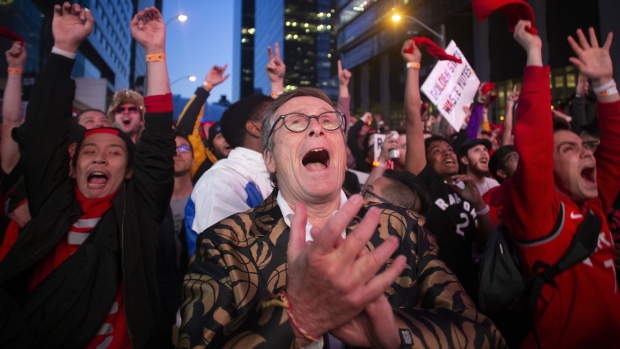 Fans wearing white and red gear started to line up outside Jurassic Park by Tuesday afternoon, waiting for the doors to open.

Will and Grace from Caledon, Ont. said they were in the city to celebrate the anniversary of their engagement.

“I said that a bucket list item was to come to Jurassic park and here we are,” Grace said. “It’s a gorgeous day for it and we are thrilled to be here.”

Marc Reeinhardt came to Toronto from Germany to watch the first three games of the season.

“I think we have big chances. We have a big line up like with Ibaka, Gasol, and also the new additions,” he said. “I can’t believe that I’m here.”

While rain is in the forecast during the day in Toronto, the wet conditions are expected to clear in the evening with a high of 15 expected.

Gates openned for the tailgate party at 5 p.m. and tipoff against the New Orleans Pelicans started at 8 p.m.