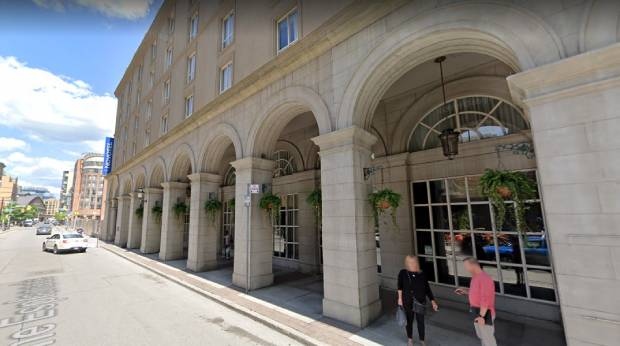 The Novotel hotel on The Esplanade is shown in this image taken from Google Maps. The city has leased the site for use as a temporary shelter.
TORONTO -

The city has extended its lease for a homeless shelter at a downtown hotel as a petition to close the site is growing amid concerns of increasing crime and vandalism in the area.

The shelter at the Novotel hotel, located at 45 The Esplanade in the St. Lawrence neighbourhood, is one of 13 such facilities currently being operated in hotels in order to improve physical distancing within the shelter system.

The city is working to extend the lease for all of those facilities through April while a “broader transition plan is developed.”

“Right now the lease has been extended (at Novotell) through to the spring because we’re having to make plans to decommission that hotel and others but it is a temporary use by the city to make sure the most vulnerable people can be sheltered in a safe situation or their health,” Mayor John Tory told CP24 on Tuesday.

The four-star Novotel hotel temporarily closed during the COVID-19 pandemic and the city obtained a lease for the space to use as an emergency homeless shelter.

The shelter opened in February 2021 and was among 40 other temporary shelters that opened across the city amid the pandemic.

The lease for the Novotell shelter was initially until Dec. 2021 but the city had said there was “potential for an extension as public health guidance changes.”

The shelter is run by Homes First and provides a variety of services to support the individuals staying there.

“There will be a clinic on site providing primary health care alongside mental health supports and housing referral workers and outreach workers on site to help people not just sleep at night but transition out of homelessness,” Spadina-Fort York Counc. Joe Cressy told CP24 in February.

However, since the shelter opened residents in the area have raised concerns about a rise in crime in the neighbourhood.

Some residents even reported seeing needles, piles of garbage and human waste on the street on multiple occasions.

Albert Ferranti lives in the area and said he along with other residents feel unsafe in their neighbourhood.

“The driveway in between our building and the hotel shelter is an open air drug market, and so it attracts the usual addiction related crime and disorder. And part of our complaint is that the city hasn't installed an effective and real safety unit,” he told CP24.

When the city first opened the shelter, it said there would be 24-hour staffing and security on site, as well as two 24/7 neighbourhood community safety teams that would monitor the area.

As of Tuesday afternoon, a petition to close the shelter has been signed by nearly 1,200 residents.

Organizers of the petition are set to present their concerns at the Toronto Police Services Board meeting on Nov. 23.