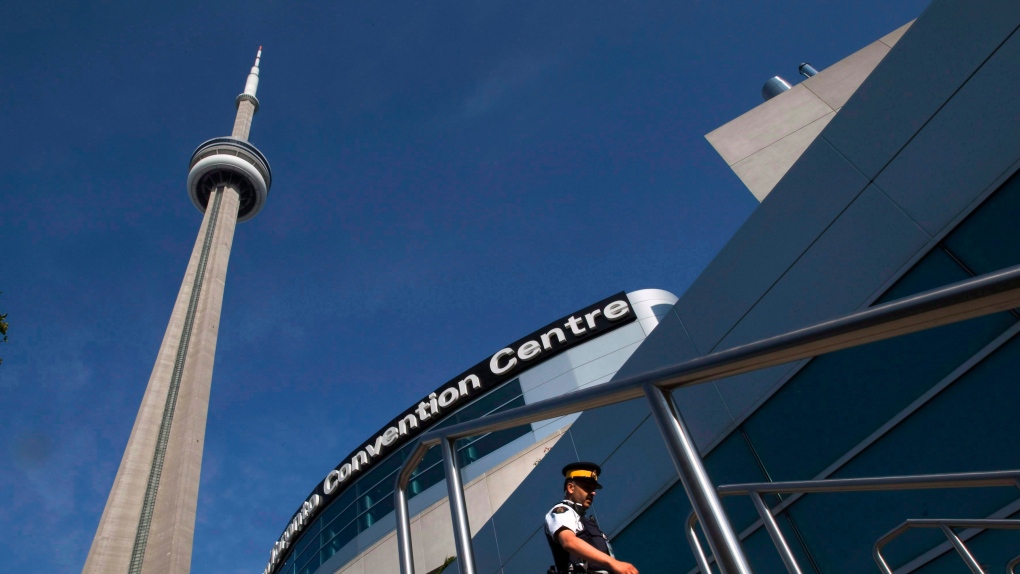 An RCMP officer patrols outside the Metro Toronto Convention Centre in this Friday June 25, 2010 file photo. (THE CANADIAN PRESS/Frank Gunn)

TORONTO -- Some prospective jurors in three Ontario cities will be summoned to convention centres and other locations as the province resumes jury selection following a six-month hiatus due to the COVID-19 pandemic.

Off-site locations will be used for jury selection in Toronto and nearby Brampton as of this week, a spokesperson for the Ministry of the Attorney General said -- among them the Metro Toronto and Pearson convention centres. Plans for an Ottawa location are also in the works.

The additional locations are meant to ensure that "health and safety measures -- including physical distancing -- can be properly implemented," Maher Abdurahman said in an email.

At the Toronto convention centre, the ministry expects that up to 250 people could attend for jury selection, Abdurahman said.

The Pearson site in Brampton will be connected virtually to a courtroom for jury selection for all matters involving an accused person in custody, he said.

The Ontario Superior Court temporarily halted in-person operations in mid-March due to concerns over the novel coronavirus, with all criminal and civil matters suspended or adjourned until June.

Dozens of courthouses reopened in July, with more doing so this week.

However, Chief Justice Geoffrey B. Morawetz previously said jury selection and jury trials would remain on hold until September at the earliest.

Jury trials have resumed in some locations with juries that had previously been selected, Abdurahman said. Prospective jurors can now also complete an online pre-screening and check-in to request a deferral or to be excused without having to go in person.

Jury selection brings together large groups of prospective jurors, which raised concerns about the possibility of maintaining proper physical distancing and other health measures.

In a document issued last week, the ministry said government staff visited the Toronto convention centre and conducted a risk assessment to identify any further controls that could help curb the spread of the virus during jury selection.

It called for, among other things, a staggered arrival for prospective jurors, mandatory face masks for the public and staff, and a deferral for any members of the public unable to wear a mask for medical reasons.

While implementing measures such as physical distancing in cases involving jurors will require a lot of additional work, it's necessary to get jury trials -- a key part of the justice system -- up and running again, said lawyer Daniel Brown, vice-president of the Criminal Lawyers' Association.

He said the province is also looking into moving some jury trials to alternate locations if the courtrooms can't accommodate distancing requirements.

It's not uncommon in remote communities to take over a high school gym and convene a trial there, so the move wouldn't be "completely unheard of," he said.

However, "it's a very rare instance up until now that the courts themselves haven't been able to accommodate jury trials," Brown said.

"Obviously, the courthouses were designed not having to consider keeping everyone six feet apart from each other, and not having that Plexiglas between people and not worried about the spread of disease the way we're concerned about that now," he said.

"Rather than try and retrofit courthouses to accommodate this, it makes good sense to take some of these cases off site and it's far less expensive and can be set up much quicker."

This report by The Canadian Press was first published Sept. 16, 2020.