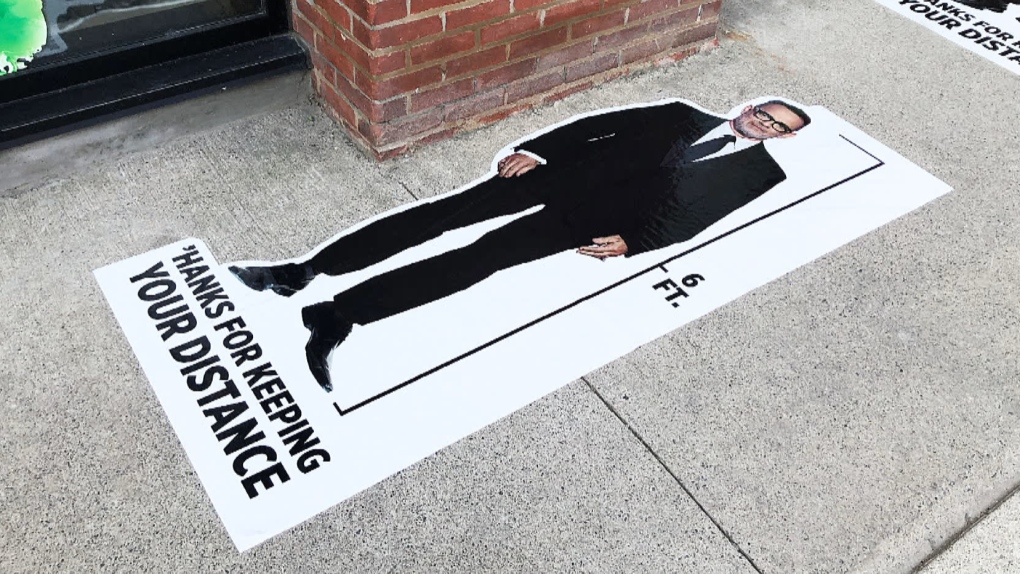 The decals show a bespectacled Hanks in a suit above the caption “'Hanks for keeping your distance.” (Public Inc.)

TORONTO -- It could be "A Beautiful Day In The Neighbourhood" if you come across a life-sized decal of Tom Hanks in downtown Toronto.

Images of the Oscar-winning actor have been laid on the ground outside of two government-run liquor stores in the city's downtown, using his six-foot frame to help customers maintain their physical distance in line.

The decals show a bespectacled Hanks in a suit above the caption "'Hanks for keeping your distance."

The non-profit initiative was developed by Public Inc., a Toronto-based marketing agency, with the aim of injecting some fun into physical distancing.

"We were a bit concerned that people were going to let down their guard, that they weren't going to be as vigilant about mask-wearing and physically distancing," said Phillip Haid, the co-founder and CEO of Public Inc., on Friday. "That's what led us to ask, 'What would it take to remind people?"'

Hanks and his wife Rita Wilson were diagnosed with COVID-19 in March, and both have since recovered from the illness.

"The idea was born with Tom Hanks because he was the first celebrity to get COVID-19 with his wife -- and he happens to be six-feet tall," said Haid.

Haid also pointed out that Hanks has been outspoken in telling people to wear masks to slow the spread of the novel coronavirus since recovering from the disease.

Although the decals are only outside two LCBO locations so far, the campaign will expand to more locations of the provincial government's liquor store chain and to some coffee shops, Haid said. He said the company came up with the project for "the public good."

Haid added that it won't just be in Toronto but at some point may be expanded to New York City, where his company has another office.

It's not clear whether Hanks himself is aware of the campaign.

Public Inc., purchased the rights to the photo, Haid said, and he hopes it will catch the actor's attention.

A message left with Hanks's publicist by The Canadian Press on Friday was not immediately returned.

This report by The Canadian Press was first published July 17, 2020.