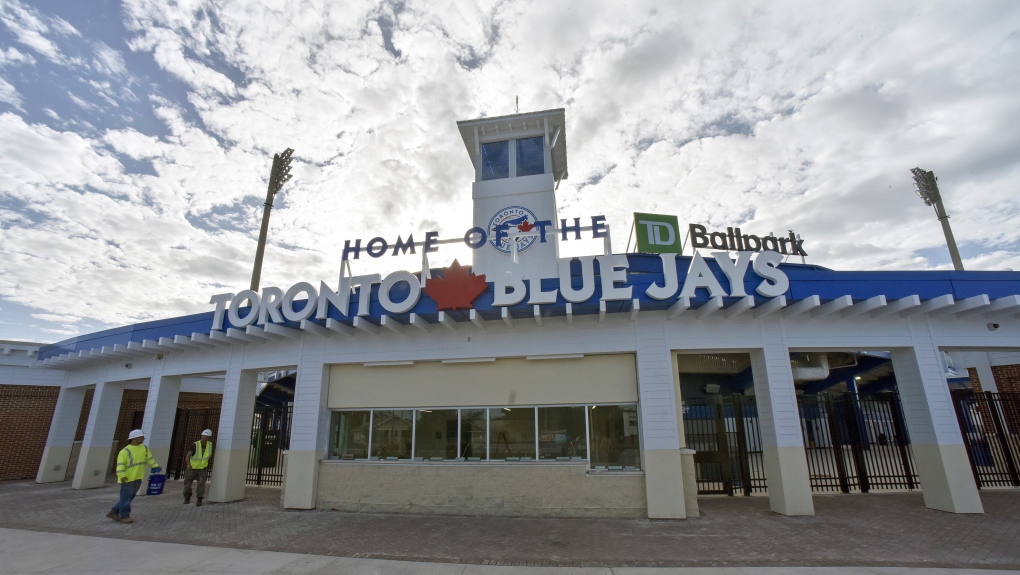 Construction workers walk past the main entrance to the TD Ballpark, the Florida home of Toronto Blue Jays, as they get the stadium ready in Dunedin, Fla., Sunday, Feb. 16, 2020. THE CANADIAN PRESS/Steve Nesius

TORONTO -- The Toronto Blue Jays will play some home games south of the border in 2021 as a long-rumoured plan to begin the campaign at their spring-training complex in Dunedin, Fla., was confirmed on Thursday.

The 8,500-seat TD Ballpark will be the Blue Jays' home venue for at least the first two homestands of the regular season, the team said in a statement.

Canada's lone big-league club played most of its home games in Buffalo, N.Y., last season. With border restrictions still in place and the COVID-19 pandemic in full swing, there's no timeline for a return to Rogers Centre.

"I think we'll all be watching the same things," Blue Jays president Mark Shapiro said on a video call. "It's going to be clear to all of us whether the circumstances present a meaningful and healthy case for us to get back home.

"That's where we want to be. We hope to get there and I think we'll all be able to gauge whether or not that's a possibility."

The Blue Jays will open their 162-game regular season on April 1 in New York against the Yankees. Toronto's home opener is April 8 versus the Los Angeles Angels.

The finale of the Blue Jays' second homestand is May 2 against Atlanta. The team will then head out on a 10-game road trip before a May 14 home game against Philadelphia.

With the Florida heat and weather more of a factor as the season progresses, Shapiro said a return to Buffalo's Sahlen Field at some point is a possibility.

"Some combination of Dunedin, Buffalo and Toronto is likely how we're approaching the season," Shapiro said. "With flexibility, certainly factoring in public health and what's best for competitiveness and our players, as being the main drivers of those decisions."

The minor-league baseball season was cancelled last year and the 2021 schedule has yet to be released. Shapiro said discussions are underway on potential infrastructure changes at Sahlen Field and what that might mean for the Bisons.

"That's our triple-A team so we certainly want them to be in the best situation possible," he said. "If we end up moving to Buffalo at some point during the season, we'll find a very good home for our triple-A team as well."

Dunedin has been the Blue Jays' spring-training home since the team's inception in 1977.

The team has full training facilities there and its players are used to the area. Similar to spring training, the Blue Jays will host fans in a limited 15 per cent capacity at TD Ballpark.

The stadium was renovated in 2019 but more work will be done over the coming weeks to get it ready for major-league games.

Shapiro said four extra light towers will be used to supplement existing lights and improvements will be made to the visiting locker room and weight room/training facilities.

He tabbed early June as an optimal date for a potential move north but noted there is flexibility if it means the team can avoid moving twice.

"Next to the health and safety of our fans, players, and staff, the Blue Jays' top priority is returning home to play on Canadian soil as soon as it is safe to do so," the club said in a statement. "The club has been actively working through plans for what a safe return to Rogers Centre could look like, while also scenario-planning alternatives.

"The Blue Jays will re-evaluate the situation and those circumstances will dictate next steps following the first two homestands.

"We want to thank all Canadians for everything they have done to slow the spread of COVID-19 in our communities. It is through these efforts that we can hope for warm summer nights under the open Rogers Centre roof, as your Toronto Blue Jays push for the post-season."

Toronto posted a 32-28 record last season and was swept in the wild-card playoff round by Tampa Bay.

The Blue Jays were one of the more active teams on the free-agent front this off-season. The biggest splash was Toronto's six-year, US$150-million deal with outfielder George Springer.

The Blue Jays will join the Toronto Raptors in the Tampa area. The Raptors are playing their home games at Amalie Arena, about 40 kilometres west of TD Ballpark, this season.

Along with getting Blue Jays and Raptors home games, the Tampa area also has seen the NHL's Lightning and NFL's Buccaneers win their respective titles and MLB's Rays advance to the World Series in the past year.

The NHL has avoided border restrictions by placing all seven Canadian teams in the North Division this season. All games are played against division opponents.

This report by The Canadian Press was first published Feb. 18, 2021.