A severe storm in Toronto flooded parts of the city, knocked out power to thousands, and shut down roads and sections of the city’s subway system Monday, as nearly 100 millimetres of water fell across the area in a matter of hours.

Rainfall totals measured 106 mm at the suburban Pearson International Airport after the storms blew through. The rain began at 4 p.m. local time, stranding commuters in cars, buses and subway trains as the busy rush hour was getting underway.

Send your flooding photos and videos to MyNews.CTVNews.ca

At the storm’s height, Toronto Hydro reported that approximately 300,000 residents were without power across the Greater Toronto Area. The agency advised residents to call 416-542-8000 to report an outage.

Tanya Bruckmueller, public affairs advisor at the agency, said Monday evening it was impossible to guess when power would be restored.

She said extra work crews were on standby ahead of the storm’s arrival, and more were being called in.

“There’s not much we can say,” Bruckmueller told CTV News Channel. “Please make sure to check in on your neighbours, your family and friends. But we don’t have an estimate for when power will be restored.”

In Mississauga, to the west, 80 per cent of the city’s 700,000 residents were without power, according to Enersource. However, late Monday it appeared that power was slowly coming back on for those residents. At 10 p.m. approximately 50,000 customers were still without power.

Power outages trapped some subway trains in tunnels until commuters could be rescued.

Shuttle buses were running, but struggled to drive through the flooded streets and around abandoned vehicles, according to TTC communications director Brad Ross.

Go Transit service was also disrupted, with part of the track on the Lakeshore West line near Long Branch completely submerged in water, making it impossible to operate trains in that area.

Metrolinx spokeswoman Vanessa Thomas said the power was shut off to the train and windows were open for ventilation. The train can carry up to 1,900 commuters during the evening rush.

Passengers on the Lakeshore East line were told to expect delays or cancellations.

Meanwhile, a rescue operation was underway late in the evening at the site of a stranded Go Transit train that got stuck on flooded tracks near Bayview Ave. and Pottery Rd. in midtown Toronto. Officers with the Toronto Police marine unit were pulling commuters from windows and moving them out via small boats.

Residents bombarded social media sites with images of several feet of water on sidewalks and streets, under bridges, in parking lots and even on TTC buses. Images showed cars submerged in rainwater that were left abandoned on major roadways.

Jee Yun Lee, anchor for 24-hour news station CP24, remained stuck on the DVP for several hours Monday evening, caught in the flooding on her way to work.

The Don River, which runs parallel to the highway, had overflowed and flooded onto the lanes.

At first drivers were calm, she said, “and then there was a sense of panic, the water’s creeping up, we’ve got to turn around.”

Drivers managed to turn their vehicles around, she said, but were stuck in a backlog of cars to exit the highway.

Toronto Police issued a news release Monday evening “advising the public to remain in their homes, avoid underpasses and low-lying areas. If in a stalled vehicle, please remain in your vehicle if possible until help arrives.”

Police also said that 911 operators are experiencing a high volume of calls, and urged residents to “please remain on the line and wait for a call-taker.”

According to Environment Canada, there is a slow moving cluster of thunderstorms with “very heavy downpours capable of producing localized flash flooding” hitting the Greater Toronto area. The line of thunderstorms has already passed over the Mississauga and Brampton regions, and is slowly moving eastward.

More rain is expected to fall Monday evening, with rainfall totals forecast to exceed 100 mm before the storm passes through later this evening.

The weather agency is warning motorists to avoid driving through water on roads.

“Even shallow fast moving water across a road can sweep a vehicle away. Watch for possible washouts near rivers, creeks and culverts.”

The storm cancelled all flights out of Toronto’s Billy Bishop Airport, and led to numerous delays and cancellations at Pearson International Airport. Pearson tweeted at approximately 9:30 p.m. that their website remained down due to “flooding in server rooms.” The airport was suggesting travellers contact their air carrier to see if their flight has been cancelled.

In Toronto, Twitter users across the city expressed shock as dark clouds suddenly blackened the skyline and it began to pour at approximately 4:30 p.m.

“Saw a mercedes300 FULLY submerged in a storm ditch in the side of the road by Pearson Airport,” one user tweeted.

“Loving the rain but no power and can’t find a flashlight to do work,” tweeted another.

Mayor Rob Ford also took to Twitter to warn residents to be careful as they make their way home.

“Be advised that we are experiencing heavy rain that may cause flooding across the City. Staff are monitoring the situation very closely,” read a tweet on the mayor’s official account. 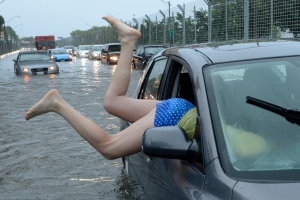 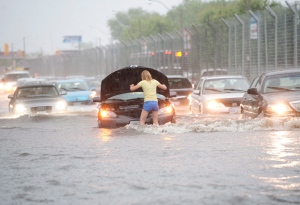