Maret Tsarnaeva, an aunt of the two brothers wanted in the Boston Marathon bombings, says she is not convinced the FBI have identified the right suspects.

Tsarnaeva, who lives in the west-end Toronto, ON. neighbourhood of Etobicoke, told reporters she has not seen any convincing evidence that her nephews, Tamerlan Tsarnaev, 26, and his brother Dzhokhar, 19, are really the perpetrators of the attacks.

Tamerlan was killed overnight and has been named by The Associated Press. Dzhokhar remains a fugitive and has been identified as a suspect by the FBI. An intense manhunt is underway in the Boston area.

“If you have evidence, or if the FBI has evidence, why are you asking me if I believe they would do this?” she told a throng of reporters in the lobby of her apartment building.

"Give me more than a photo. But to be convinced that my nephews committed to these atrocities, convince me. Then come back and get my reaction and ask me how I feel."

Tsarnaeva, who said she’s Chechen and is used to being set up by the police, added that she doesn’t trust the photos released by the FBI.

“I’m suspicious that it was staged, that the picture was staged,” she said.

Tsarnaeva explained to reporters that the family fled the Russian province Dagestan, which neighbours Chechnya, for Kyrgyzstan in the early ’90s.

Dzhokhar came to the U.S. as a child with his parents in 2002 and the family applied for refugee status. They left behind Tamerlan and his two sisters in Russia. After the family received refugee status, the rest of the children emigrated a few months later.

She says Tamarlan was not a devout Muslim, but that about two years ago, he began praying five times a day. 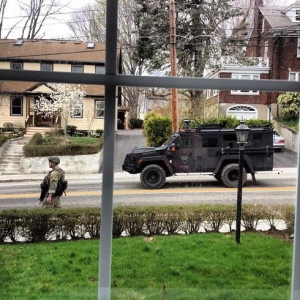 From a citywide lockdown: Tweeted photos from Watertown residents