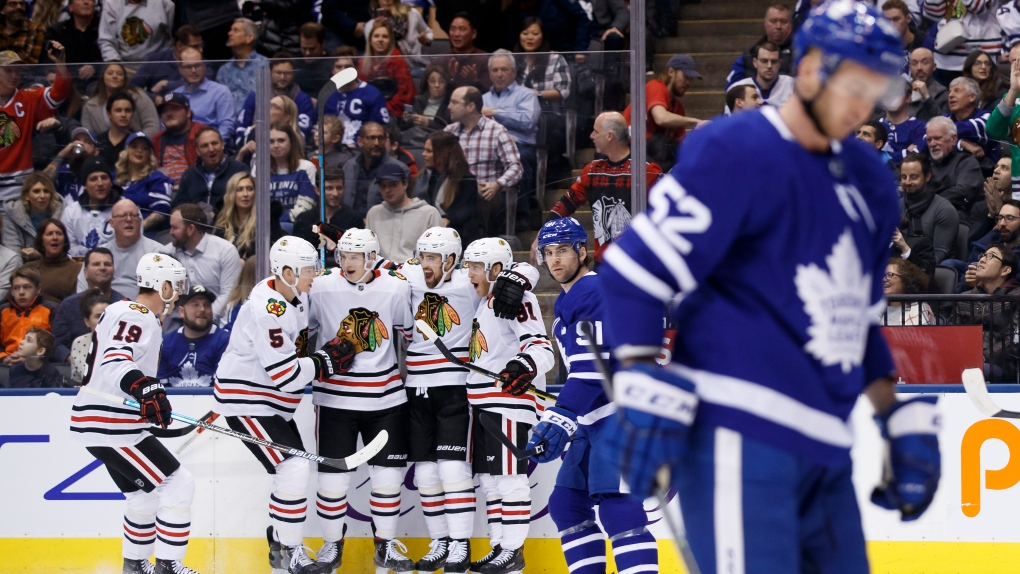 TORONTO -- Jonathan Toews scored twice to go along with two assists, Patrick Kane set up one to reach 999 career points, and the Chicago Blackhawks downed the listless Toronto Maple Leafs 6-2 on Saturday.

Dominik Kubalik added two goals and an assist for Chicago (23-20-6), while Drake Caggiula, with a goal and an assist, and Brandon Saad provided the rest of the offence. Corey Crawford made 31 saves and Erik Gustafsson chipped in with two assists.

William Nylander and Alexander Kerfoot replied for Toronto (25-17-7), which looked like it already had one foot out the door with a nine-day break looming, fell out of a playoff spot in the Eastern Conference.

Frederik Andersen allowed six goals on 34 shots as the Leafs fell to 1-3-2 over their last six games after starting 15-4-1 under new head coach Sheldon Keefe. Tyson Barrie had two assists.

With the league-mandated bye week and all-star festivities on the horizon, and tickets in hand to jet off to warmer climates, the Leafs weren't close to ready against a hungry opponent looking to secure its fourth straight victory.

Caggiula opened the scoring on the night's first shot just 21 seconds in, collecting a puck off the end boards and banking home his fifth goal of the season from the side of the net off Andersen.

Toews doubled Chicago's lead at 5:32 on a delayed penalty when he stepped around fourth-liner Adam Brooks and snapped his 13th through Andersen's five-hole.

Nylander had a couple of chances from the slot to get Toronto back within one, but Crawford was there as the Leafs - still minus a pair of injured top-4 defencemen in Morgan Rielly and Jake Muzzin - finally showed a bit of life.

The spurt, however, was short-lived as the Blackhawks, who have two more games before getting 10 days off, made it 3-0 at 11:02.

Activated off injured reserve after missing his team's last 12 contests with an ankle problem, Saad took a quick pass from Kane at the blue line after Andreas Johnsson turned the puck over, and the Chicago winger fired his 12th upstairs as Toronto gave up three goals or more in the opening 20 minutes of a game for the fourth time this season.

Nylander got one back 25 seconds into the middle period with his 22nd on a power play, but Toews fought off Martin Marincin on a wraparound to make it 4-1 just 2:54 later for his 14th.

Timothy Liljegren, who made his NHL debut as the Leafs dressed seven defencemen, then got caught between two minds deciding if he should change or not, and Kubalik pounced by taking a feed from Toews and ripping home his 19th at 10:58.

Fans at Scotiabank Arena gave Andersen a Bronx cheer on his next save - his 12th on 17 attempts on goal.

Kerfoot tipped a Pierre Engvall shot for his eighth at 15:17, but Kubalik made it 6-2 just 2:25 after that when the rookie batted a saucer pass from Toews out of mid-air right in front of Andersen for his 20th.

Toews, who joked Saturday morning he's “almost sick of hearing” about Kane's pursuit of 1,000 points, now has 798 of his own.

Engvall hit the post for Toronto four minutes into the third, but that was about it from the home side in terms of pushback.

No doubt smelling his milestone within reach, Kane had three cracks at 1,000 points on a dominant shift midway through the period, but Andersen - one of the Leafs' three all-stars along with Auston Matthews and Mitch Marner - shut the door to save a little face on an otherwise miserable night.

Notes: Chicago beat Toronto 5-4 at the United Center in November. ... Kane had his No. 88 retired by the Ontario Hockey League's London Knights on Friday. The 31-year-old recorded 145 points (62 goals, 83 assists) in one junior season with the club back in 2006-07. ... Toronto's next game is Jan. 27 at Nashville. ... Chicago hosts Winnipeg on Sunday and Florida on Tuesday.

This report by The Canadian Press was first published Jan. 18, 2020.