Three people are dead and more than 350,000 are without power after an intense thunderstorm pummeled southern Ontario Saturday afternoon.

The severe weather system left fallen trees and downed power lines in its path as emergency crews across the province were inundated with calls for help.

Tragedy struck first in Brampton where police said a woman in her 70s was walking alone in the area of Belmont Drive and Birchbank Road when she was struck by a falling tree.

Mubbsher Zaman was nearby when he said he saw two feet sticking out from under the branches.

The woman was transported to hospital where she was later pronounced dead.

Then, hours later, provincial police said that a tree fell on a camping trailer at Pinehurst Lake Conservation Area near Kitchener, which left one person dead and two others injured. 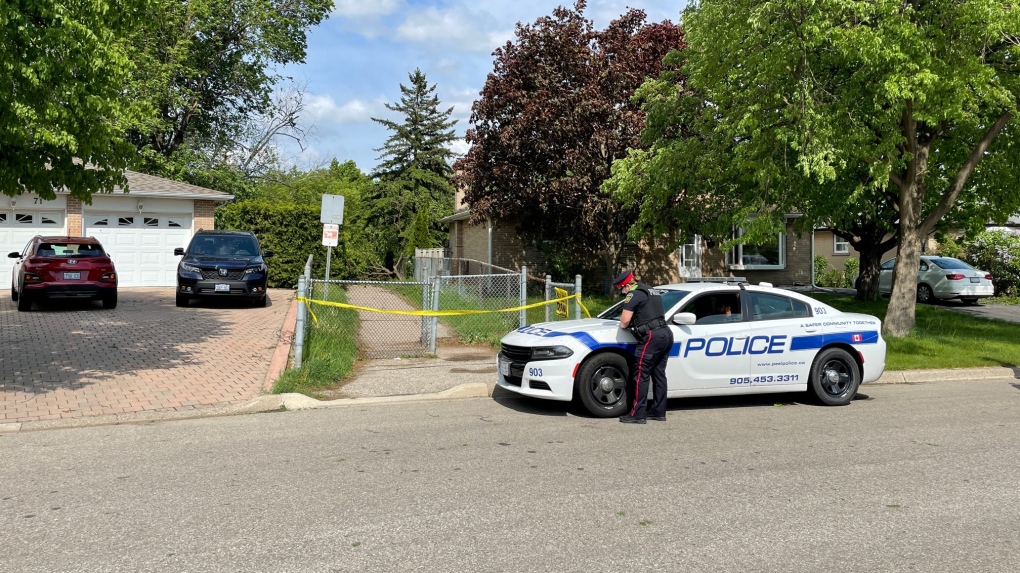 The deaths are not limited to the Greater Toronto Area. Police in Ottawa confirmed late Saturday evening that one person had died during the storm, though the details surrounding their death were not immediately disclosed.

Provincial party leaders took to social media in the aftermath of the storm to offer their condolences to the friends and families of the victims.

During the height of the extreme weather event, Toronto Fire said it received nearly 150 calls from people looking for help. At the same time, the Toronto Police Service (TPS) was forced to close its non-emergency due to the influx of calls.

Const. Alex Li said that within a two-hour window, TPS received as many as 360 calls for service.

Deputy Fire Chief Tony Bavota told CP24 Saturday that one firefighter was injured after he was struck by a falling tree while responding to a 911 call and was transported to hospital in stable condition.

At least one other person was seriously injured in midtown Toronto as strong winds and rain battered the city. The details of that incident are unclear, but Toronto Paramedic Services told CP24 that a woman in her 40s was transported to a trauma centre as a result of her injuries. 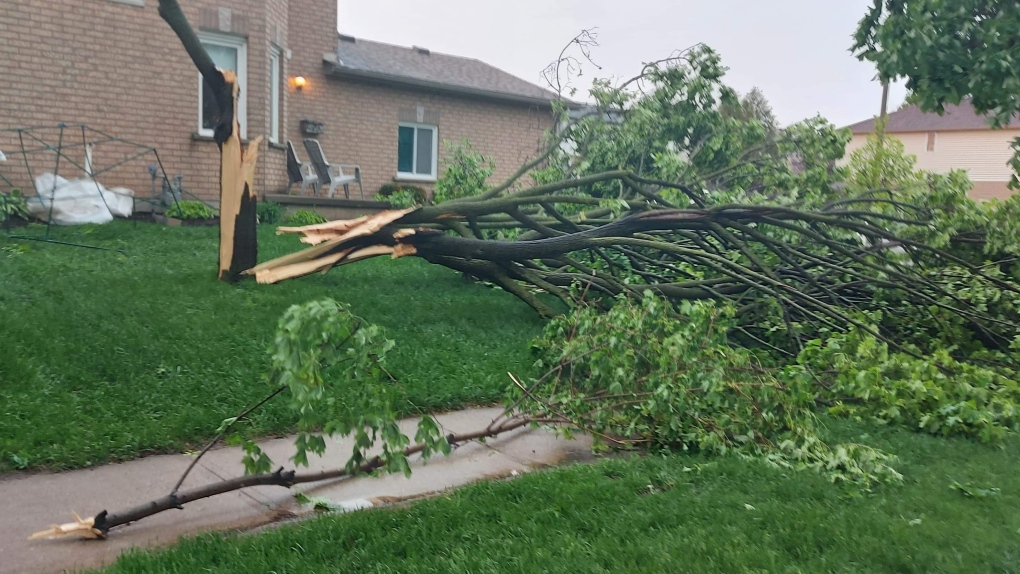 A tree has been knocked down in Kitchener during a severe thunderstorm that hit southern Ontario Saturday afternoon. (Courtesy: Renee Chappell)

MORE THAN 350K WITHOUT POWER

At time of writing, and according to Hydro One, more than 350,000 people are without power following the storm.

The company said it is responding to power outages across the province and advised individuals to stay at least 10 metres back from any fallen power lines, even if they do not appear to be live.

In Toronto, the exact number of those without power is unknown as Toronto Hydro’s outage map is unavailable “as a result of the high volume of outages”

In a statement to CP24, the company said it was still assessing the extent of the damage and that equipment broken during the storm could hamper restoration efforts.

“In many cases, trees and tree limbs need to be removed first to help make the area safe for our crews to work,” a spokesperson said. “We’re reminding our customers to stay safe, especially if they come across a downed power line.” 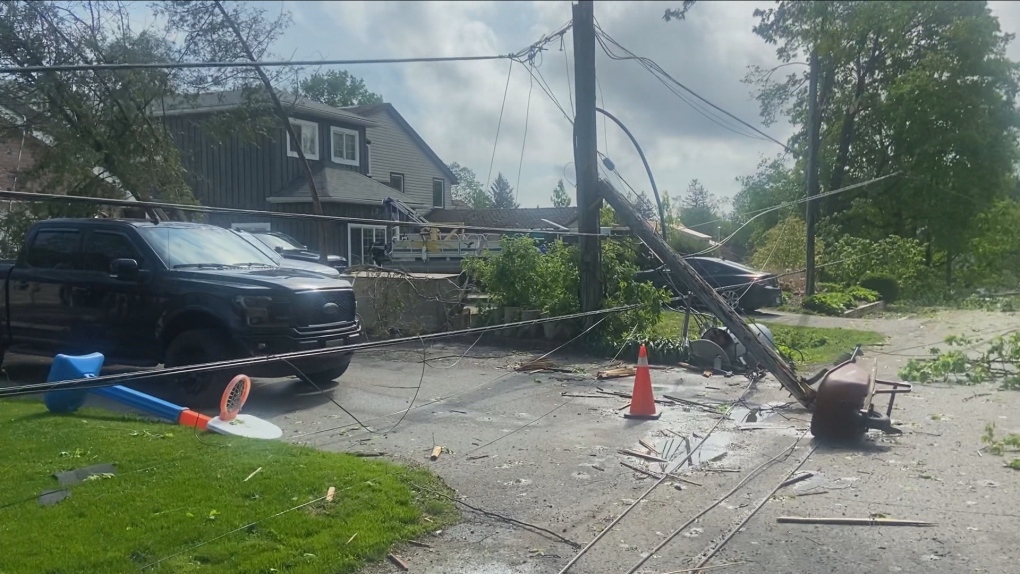 An alert by Environment Canada was pushed to phones, TV screens, and radio stations across Ontario at approximately 12:45 p.m. warning residents to "take cover" as the threatening weather approached.

The agency said the option to issue an emergency weather alert was included in their system last June, but this is the first time it has been used.

Officials said they chose to use the alert due to strong winds near Kitchener that were expected to gust at about 131 kilometres an hour.

At Toronto’s Pearson Airport, winds were gusting at 120 kilometers an hour at around 1 p.m. 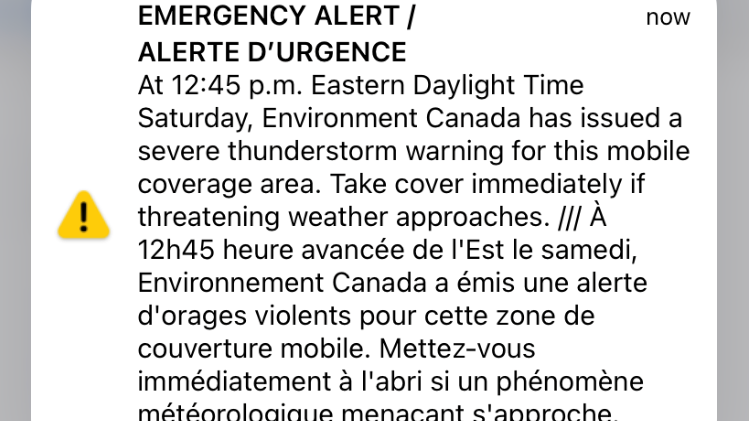 A weather alert that was sent to the mobile phones in Ontario on May 21, 2022 is seen in this image.

STATE OF EMERGENCY IN UXBRIDGE

Uxbridge has declared a local state of emergency after the town saw significant damage as a result of the storm.

Officials said widespread power outages are ongoing and many roads have been forced to close in the face of downed power lines and fallen trees.

Images captured by CP24 show the destruction on the ground with parked vehicles all but totalled and surrounded by nearby destroyed structures.

Although unconfirmed by Environment Canada, there have been reports online that a tornado touched down in the area and nearby Whitchurch-Stouffville.

Residents who spoke with CP24's Bakari Savage said they expect the cleanup to take months.

With files from Katherine DeClerq 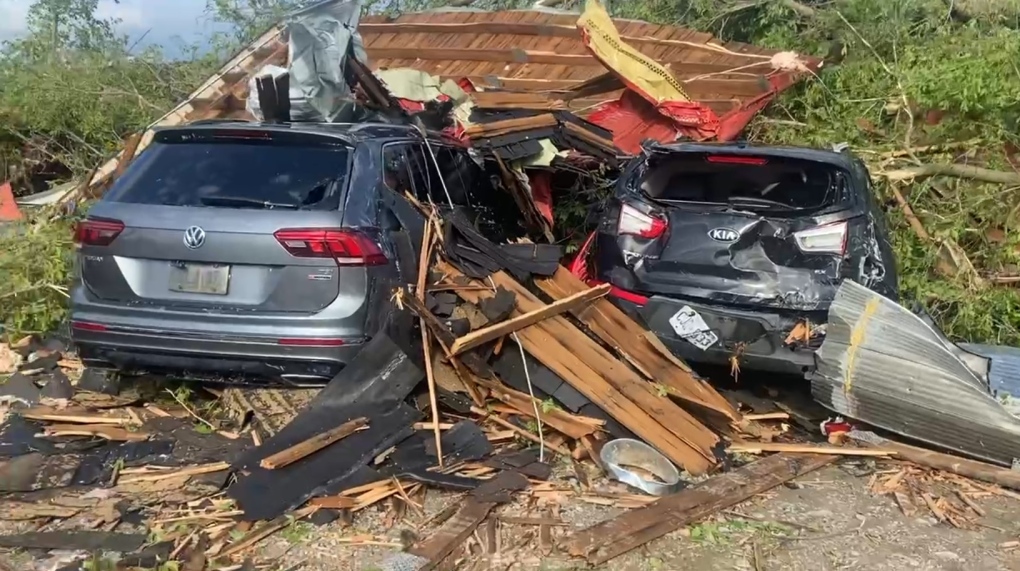 The wreckage left behind from a powerful thunderstorm in Uxbridge, Ont. is seen in this image. (CP24/Bakari Savage)

Mounties on Vancouver Island have publicly identified the two gunmen killed during a shootout with police at a bank in Saanich on Tuesday.