TORONTO -- The three children of a Toronto police officer who died in the line of duty this summer were presented official police hats bearing their dad's badge number.

Det. Constable Jeff Northrup’s three children, along with their mother Margaret, attended a memorial for their dad at the Police Memorial at Queen’s Park.

It was the first public event they’ve attended since Northrup’s funeral this summer.

The caps were presented by Toronto’s Police Chief James Raymer, who said the family is coping as best they can.

“You know they are doing pretty good, it is tough, particularity for Margaret, every time she hears his name, but they seem to be managing pretty well,” she said.

The 52 division officer died after he was hit by a vehicle while answering a robbery call in the Toronto City Hall underground July 2nd. 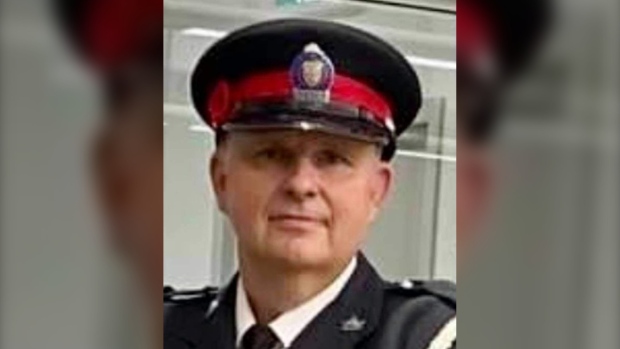 The officer was in plain clothes at the time and was run over.

He had been in jail since his arrest but just yesterday, the Northrup family learned he was released on bail.

The Northrup family declined to be interviewed, but Raymer said he spoke to them about the bail.

“I think it is concerning, just because of the nature of the event and loss of Jeff. It’s tough for them.”

Thursday’s event was part of the National Peace Officer’s annual run, where pre-COVID, officers would run a three-day relay from the memorial in Toronto to Parliament Hill in Ottawa for a ceremony.

But during the pandemic, the runs have either been virtual or short runs to mark the day. Thursday, a short run led by Northrup’s son Mitchell, from Queen’s Park to 52 Police Division, where Northrup was stationed. There they were met by cheers from division officers then a minute of silence for their fallen colleague.

The officers jogged back to the memorial placing candles by the names of the fallen, which include Sgt. Ryan Russell also of 52 Division and Toronto Police Constable Todd Baylis, shot dead in the summer of 1994 while on duty.

Constable Laurie McCann was friends with both Northrup and Baylis.

“Why we are doing this? For these officers who have given their life in the line of duty. Jeff and Todd Baylis was a friend of mine as well, so I kind of think about them and they are not here and all we can do is take time out of our day and run for them.”

As dusk fell, the officers took time for private reflection at the always growing monument of those who have fallen in the line of duty.