Thousands of people turned out for the public memorial service held today for a Toronto police officer who died one week ago following a tragic car crash.

Family and friends joined police officers in the memorial service for Const. John Zivcic, which was held in the north building of Toronto Congress Centre.

Zivcic, 34, collided with a vehicle while responding to an emergency call about an impaired driver on Nov. 30. He was rushed to St. Michael’s Hospital and underwent several operations, but died of head injuries two days later, surrounded by family.

“We’re gathered with heavy hearts and a solemn duty to say goodbye to one of our best,” Wynne said during the memorial. “I’m very honoured to be here to pay tribute to the service and sacrifice of Const. John Zivcic, and to offer my thanks and my support to his family and to the friends and colleagues that he leaves behind.”

Meanwhile, Blair said police service is a “calling that requires courage and compassion. And it is a calling which police Const. John Zivcic was very well suited.”

“Every day, members of the Toronto Police Service and members of the police services the province of Ontario and throughout the country, answer the call to duty. They have chosen to serve and protect the public,” Blair added.

“We’d spent every second of every day together,” Tom Zivcic said, recalling childhood memories. “His laughter was infectious and crippling. When you would hear it, you couldn’t help but laugh with him – it would fill a dark room with blinding light.”

Before the service, thousands of police officers lined both sides of the street along a procession route. Officers saluted Zivcic as the funeral cortege made its way from Delmoro Funeral Home in North York to the Toronto Congress Centre.

A public visitation will also be held Tuesday at the Bocchinfuso Funeral Home.

In another tribute, the CN Tower will be lit blue Monday night in honour of Zivcic, who served as a divisional traffic officer with Toronto Police’s west-end 22 Division for the past six years.

On Sunday, a steady stream of mourners arrived at the Delmoro Funeral Home, including Toronto Mayor Rob Ford and Police Chief Bill Blair.

With a report from The Canadian Press 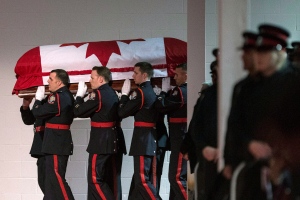