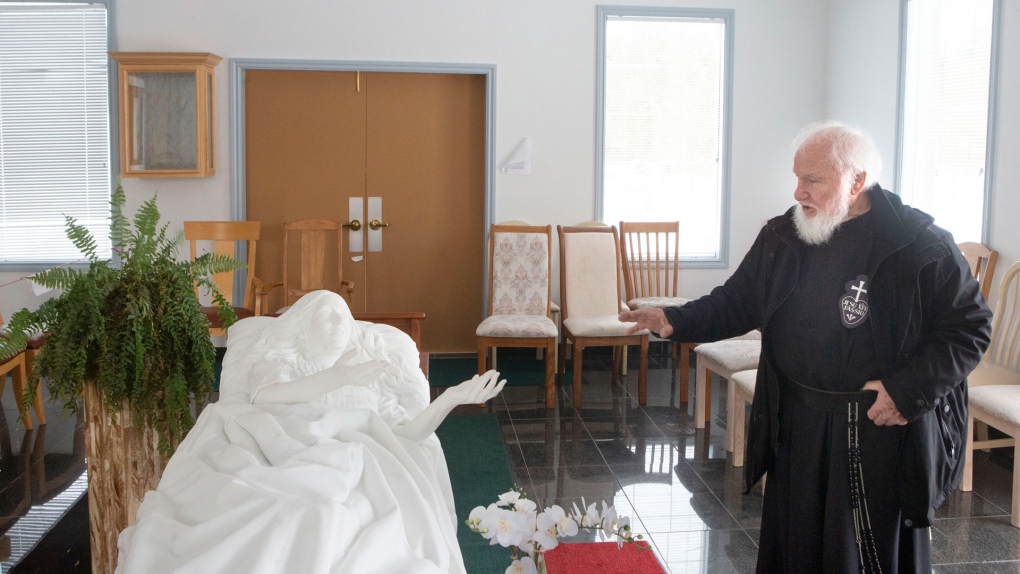 Father Claudio Piccinini, a Catholic priest and founder of "Teopoli, the City of God," a religious place of worship, in Gravenhurst, Ont., stands with a white Carrara marble monument of Sister Carmelina lying in her hospital bed, on Friday, December 13, 2019. (THE CANADIAN PRESS/Chris Young)

GRAVENHURST, ONT. -- Father Claudio Piccinini could use a few miracles.

For one, a miracle would really help Sister Carmelina Tarantino. She died in 1992, but a confirmed miracle now would send her sainthood application hurtling through to the next phase of the bureaucratic process in Rome.

The Archdiocese of Toronto recently wrapped up its 10-year investigation of Sister Carmelina and sent 10,000-pages of documents to the Vatican in November. She could be Toronto's first-ever saint, but the process can take years -- even centuries -- to complete.

Piccinini, a 79-year-old Catholic priest who belongs to the Passionist congregation, does not have that long. His once-dark beard and curly hair have gone white.

He stands on a bridge over a waterfall on a 200-acre property known as Teopoli, or the City of God, in Gravenhurst, Ont. Beavers swim in the creek as he reflects on Sister Carmelina's life, and the time he has left.

"We really miss her. What she could do, I could not dream of doing," Piccinini says.

What she could do was attract legions of devotees, who lined up to see her in what Piccinini calls the "glory days" of the 1970s and 80s.

Sister Carmelina first came to Canada from Liveri, near Naples, Italy, on July 4, 1964 to join her seven brothers and sisters who were already here. Three other siblings remained in Italy.

She was not well, and eventually she was diagnosed with a rare form of cancer. By 1969, she was admitted to Riverdale Hospital and would never leave. Doctors removed her left leg, left hip and her right breast. She lost the use of her right leg. She was given, at most, two months to live.

She lived through high fevers, headaches and bodily pain that only abated, briefly, with her morphine shot that came every six hours. The wounds from her surgeries never healed, so hospital staff built a canopy of her bed sheets so the seeping blood wouldn't stick.

She lay prone the rest of her life, only her arms and head able to move.

One day in 1973, Sister Carmelina called Piccinini from the hospital after hearing him on the radio. She told the priest about her illness and her then four-year stay in the hospital.

"I got it very quickly that this person is a very special individual," Piccinini says.

He told her about Societa Unita, an association of Roman Catholic families he started, and his dream for the land in Gravenhurst: to build a destination for people to pray, relax and have fun. She fell in love with the idea. He fell for her devotion, wisdom and her seemingly inhuman tolerance for suffering.

"You can because you got the goods," he remembers telling her.

A lifelong friendship blossomed, and in those "glory days" of the 70s and 80s Sister Carmelina attracted legions of devotees. They lined up inside Riverdale Hospital, which has since been demolished to make way for a new hospital, to talk to her, to be in her presence.

"Now we say, 'Where are you? We need you here. We need a miracle. We need people. We need help."'

Hundreds still flock to Teopoli every year, including an annual summer pilgrimage from Toronto that takes about eight days to walk. They come to kiss the five-metre tall cross that is the compound's focal point; to soak up the memory of Sister Carmelina; and to spend a day in prayer.

But they used to come by the thousands.

And in the intervening years, many of the property's buildings have fallen into disrepair -- two had to be demolished in 2018, including the chapel, the contents of which are now in the dining room.

Teopoli is the result of both Sister Carmelina's vision and the hard work of Piccinini and many others in the devoted Italian-Canadian Catholic community.

The devotees remain steadfast. Three of them -- Romeo Meleca, 88, Frank Tedesco, 93, and, Joe Colalillo, 72 -- tend to a long to-do list of chores on a chilly December day. Winter is downtime at Teopoli, with fewer visitors than in the warmer months. For now, only Colalillo lives on the property.

Meleca lost his ability to walk in 1976. Arthritis affected several discs in his back and he needed crutches to walk. Inspired by Sister Carmelina's suffering, he threw away his medication. Five years later, his back healed, he walked to Teopoli, some 200 kilometres away, the first pilgrim. He walked again last year.

"I have been helping here at Teopoli ever since, to thank God for my legs," Meleca says as he wipes sweat from his brow and sips red wine.

In 1976, Piccinini says he did "the craziest thing in his life" when he asked to see Sister Carmelina's diary.

"A man does not ask a woman to allow you to read her diary," he says. She was on a spiritual journey, but she was also suffering. He wanted to see if he could help.

"I thought, 'Is this really happening or is this in your mind? Are you hallucinating?"'

He spent years probing her claim, being "part FBI agent." She detailed the experiences in her diary, including prayers with Jesus, who she said held her hands at her bedside.

Piccinini says he tested her, asking her to write down one of the prayers. When he returned the next week, he found a prayer in Latin, a language Sister Carmelina, who had only a fifth-grade education, did not speak.

"I'm looking at all her books, thinking she copied it. She's a genius and out-thinking me," he says.

"She wakes up and says, 'You can look all you want, you're not going to find it there."'

Then came the "incident in Massachusetts," as Piccinini calls it.

He was working there when a woman, full of tears, told him about her inability to get pregnant. He told her he'd ask for Sister Carmelina's help. He phoned his good friend that night, and she told him to relay the message that the woman would get pregnant.

Piccinini says he reluctantly told the woman. Several months later, the woman returned with news she was pregnant and later gave birth to a baby boy. Her doctors, Piccinini said, were astounded.

He was now convinced Sister Carmelina was "in tune with God."

So in 1977, Piccinini helped her become a Passionist Sister of St. Paul of the Cross. More than 300 packed into a room at the hospital for the ceremony.

Now, Sister Carmelina has the backing of Catholics across Toronto, including Rev. Frank Carpinelli, who was tasked as the woman's postulator, shepherding the 10-year-probe of Sister Carmelina -- gathering her writings, tapes and testimonials of 60 people who knew her.

"We ended up with 10,865 pages of documentation," Carpinelli said.

That filled six banker's boxes. And he needed three copies, with each document notarized.

"From what I experienced, I am absolutely convinced this is a very holy woman," he said.

The next step is to be declared venerable, which means, essentially, she "was a good person who we should honour as an example," according to Cardinal Thomas Collins of the Toronto archdiocese.

Collins does not think Sister Carmelina will have to wait long to become venerable, but after that she'll need a couple of miracles to become a saint.

"Then we ask the Lord to show us a sign that this is someone we should look to as a model Christian," Collins says. "That is usually a miracle."

A thorough vetting process kicks in at the Vatican, which employs a number of people, including medical experts -- ideally atheists -- and a lawyer, the Devil's Advocate, to poke holes in miraculous claims.

The miracles are usually medical in nature and cannot be explained by science, Carpinelli says.

Once satisfied, the person is beatified and declared "blessed." After that, Sister Carmelina would need one more miracle to be declared a saint, a process called canonization.

The cardinal says Sister Carmelina's message is more important than the road to sainthood.

"The message is simple: show love, even despite suffering," Collins said.

"I sure think she's a saint. Her holiness came in bearing with an illness with love and not with anger. And by doing that she changed the lives of countless of people. She did more from her hospital bed than most people do any other way."

This report by The Canadian Press was first published Dec. 24, 2019.