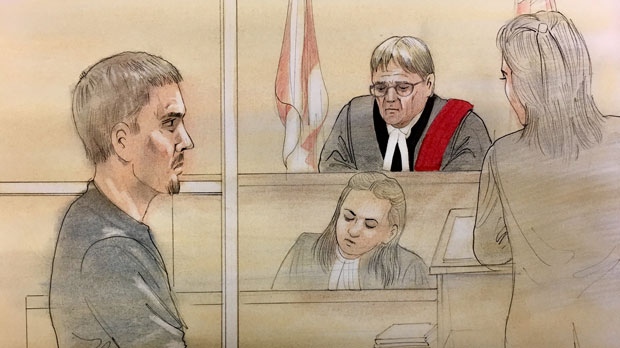 An arrest has been made in a Scarborough break-in that left a homeowner with an injury to his leg.

A suspect identified as Richard Nolin, 27, appeared briefly in a downtown courtroom Tuesday afternoon to face charges in connection with the March 13 incident.

The incident unfolded after a man arrived at his Harewood Avenue home with his four-year-old son to find an intruder inside. The man decided to confront the intruder. A struggle ensued and the homeowner was stabbed in the leg with a screwdriver, police said at the time.

The homeowner then struck the intruder over the head with what was believed to be a hockey stick before the intruder took off, police said.

Then, nearly two weeks after the break-in at about 1:15 p.m. Monday, a police officer was investigating a theft at the LCBO a short drive away from the Harewood Avenue home, where a man was allegedly putting up a fight. After placing a suspect in custody, police concluded he matched the description of the suspect in the Harewood home invasion.

Nolin's charges include assaulting a police officer and several offences related to the break-and-enter.

He was remanded into custody Tuesday and is due back in court Wednesday.

Nolin has several charges currently before the Barrie courthouse, including aggravated assault, assault with a weapon, possession of a weapon and failing to comply with probation.