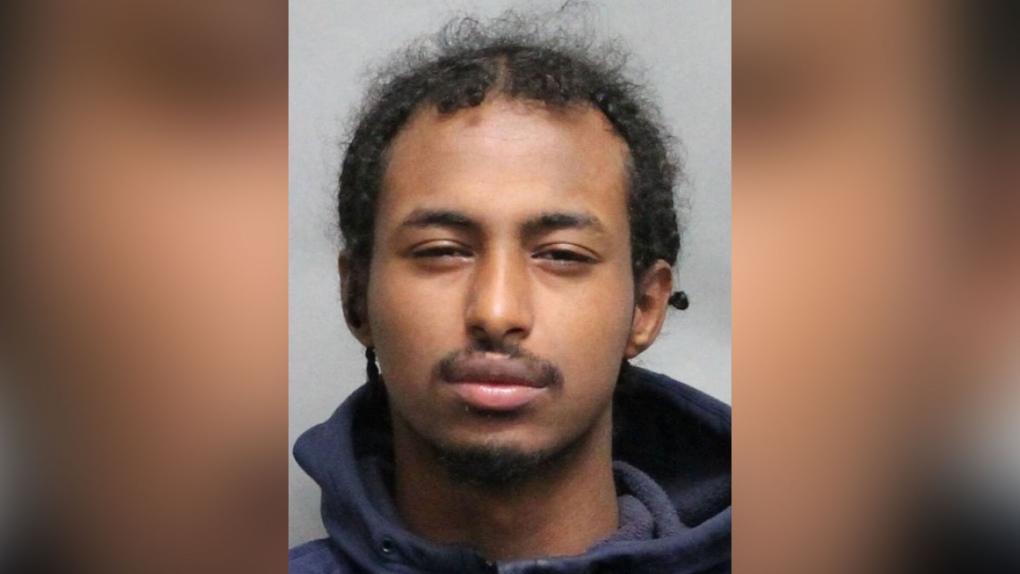 Mohamed Hassan is seen in this undated photograph provided by police.

A man wanted by police in connection with a drive-by shooting in Etobicoke that killed a 21-year-old man has been taken into custody in Saskatchewan more than a year after the alleged incident.

According to investigators, Habil Abdilahi Hassan and another man were driving in the area when a vehicle pulled up alongside them. At least two suspects opened fire on the vehicle, striking Hassan and the other occupant.

The suspects fled the scene and the victims drove to another area and dialed 911.

Both were transported to hospital with gunshot wounds, but Hassan was pronounced dead shortly after.

Later that month, police issued a Canada-wide arrest warrant for 20-year-old Toronto resident Mohamed Hassan in connection the shooting. He was wanted for first-degree murder and attempted murder.

In April 2022, about a year after police first issued the arrest warrant, police included Mohamed Hassan’s name on the BOLO program’s list of Canada’s top 25 most wanted fugitives.

A few months after that, police offered a $50,000 reward to anyone with information about his whereabouts.

“Let me be clear; these fugitive cases are some of the most heinous the BOLO program has had the unfortunate task to amplify,” BOLO program director Max Langlois told reporters in July 2022.

On Tuesday, police said that Mohamed Hassan, now 22 years old, was taken into custody in Prince Albert, Saskatchewan, on an unrelated matter. He is scheduled in court locally for those charges and investigators say they are working to have him transferred back to Toronto.

The men’s World Cup quarterfinal stage kicked off on Friday as Croatia eliminated Brazil and Argentina beat the Netherlands. CTVNews.ca has all the latest from the tournament.

Pulled from a sunken trunk at an 1857 shipwreck off the coast of North Carolina, work pants that auction officials describe as the oldest known pair of jeans in the world have sold for $114,000.

Two Mounties who shot a man in his pickup truck at an Alberta rest stop were found not guilty on Friday of manslaughter and aggravated assault.

A security breach linked to Ontario’s COVID-19 vaccine portal exposed the personal information of thousands of people in the province.

A ruptured pipe dumped enough oil this week into a northeastern Kansas creek to nearly fill an Olympic-sized swimming pool, becoming the largest onshore crude pipeline spill in nine years and surpassing all the previous ones on the same pipeline system combined, according to federal data.