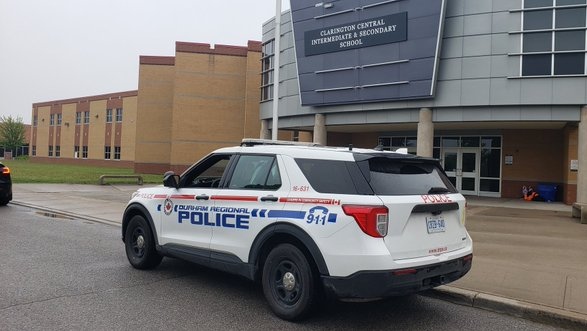 Durham police say they’ve identified a male suspect who allegedly made online threats towards students and staff at a Bowmanville high school and charges are pending in the case.

The individual is a youth from outside the region, police said.

Speaking to CP24, Const. George Tudos said while he can’t get into the specific nature of these threats, they pertained to the “safety of students and staff” at Clarington Central Secondary School. Those concerns are no longer an issue, he said.

Tudos said investigators are examining evidence currently. He said they’ve seized computers and cell phones, and will be executing search warrants on these items.

Any charges laid will depend on what they find, said Tudos, adding previous incidents of this nature have resulted in charges laid for uttering threats, uttering death threats, and public mischief.

Durham police, who were made aware of these threats Thursday evening, are working with investigators from other jurisdictions on the case.

“We take these types of threats very seriously,” said Tudos, who along with several other officers attended the school today.

In a statement, Superintendent of Education for the Kawartha Pine Ridge District School Board Jamila Maliha said the board takea “all threats seriously” and “worked actively” with police today to respond to this situation.

She said the board appreciates it has been a “very concerning day for our students and families” and said they’re grateful for the support from local police as well as the “whole school community … for the way they cared for each other through this difficult day.”

This investigation is ongoing.

The threat presented itself the same day that a man carrying an imitation firearm was fatally shot by police outside of a Toronto elementary school.