TORONTO -- The father of a three-year-old boy in desperate need of a liver transplant says his son’s surgery may be significantly delayed due to the COVID-19 outbreak.

“Outside of a very distended belly ...you wouldn’t know,” Travis told CTV News Toronto. “He’s a happy kid, he laughs, and he brings joy everywhere.”

Travis said that Max is in the hospital for “about three months of the year” for treatment of his condition. “Our family moves into SickKids and they give him great treatment for about a month and then we get discharged and cross our fingers until the next time.”

In January, Max’s condition took a turn for the worse.

“We always kind of thought transplant would be the end of the road, but we tried to prolong that as much as we could. In January, unfortunately we had a setback which landed Max on the transplant list at SickKids and we’ve been crossing our fingers since then.”

Travis said that Max’s surgery was scheduled for April 16, but due to the changing healthcare landscape in Ontario and across the country in response to COVID-19, that timeline is now in jeopardy.

“No one is talking about April anymore,” Travis said.

Last week, Travis was approved as Max’s liver donor. But in another disappointing development, Travis says that the surgery to remove part of his own liver for the transplant is considered elective and may be placed on hold.

Earlier this week hospitals in Ontario, Saskatchewan and British Columbia began to suspend all elective surgeries. 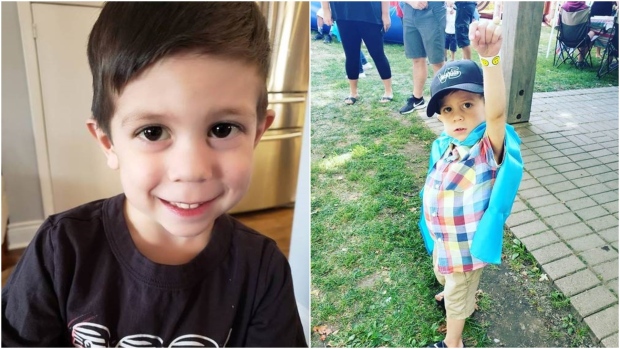 "We just found out, not 30 minutes ago that the University Health Network has had to close all of its pulmonary labs and according to Health Canada having a pulmonary test is mandatory ahead of any transplant. I’m hoping that Health Canada, the surgeons, can make a special exception and ensure that this surgery still happens."

Travis added that he is now considering treatment options for his son in the United States, an alternative he says is "incredibly sad."

"Elective surgeries are not on hold as they are in Canada and I’m looking into what steps we would need to take to do that south of the border."

CTV News Toronto has reached out to Health Canada for comment but did not hear back in time for publication.