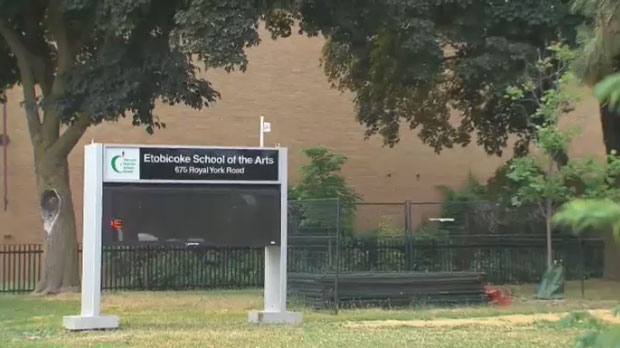 TORONTO -- Students from a Toronto school are calling for the resignation of a principal who compiled a list of black students to track their performance.

Peggy Aitchison, the principal at the Etobicoke School of the Arts, has said she compiled the list and circulated it among teachers in an attempt to categorize students with opportunity gaps, and acknowledged in an email to the school community that it was an "inappropriate approach."

She asked for a transfer to a different school in a public letter sent this week -- a request the Toronto District School Board said it approved.

The board has apologized for Aitchison's actions, calling what she did a "mistake." Aitchison did not respond to a request for comment.

Grade 12 student Marlee Sansom said she was "unbelievably angry" when she found out about the list from members of the school community. She said transferring Aitchison to another school isn't enough, and called for the principal to resign as an employee with the board.

"Transferring someone just means they get a new start, a fresh start, and she can just redo that trauma somewhere else," said the 18-year-old, who noted that many of her peers felt the same. "It doesn't help the students that are still in the school."

Sansom also said it was important for the board to thoroughly tackle issues of racial profiling in schools, and urged it to involve students in the process.

"The TDSB needs to be looking out for the students," she said, adding she wasn't always comfortable raising concerns about race-related issues with school administration.

Noah Brown, another Grade 12 student, said he saw his name on a copy of the list being shared among students and felt "pure sadness."

"Over the course of this year I've been able to accomplish so much in terms of my art practice ... I was disappointed because it was limiting my academic success to my identifiable race," said the 18-year-old. "I didn't know who to turn to."

Brown said he wanted a direct apology from Aitchison.

"She was sort of letting the issue fade away rather than take it directly and be a responsible leader," he said, adding that Aitchison's list is an indication she should no longer be an educator.

"Peggy Aitchison is not a suitable leader for (Etobicoke School of the Arts) as well as any other school," he said. "If TDSB continues to have this principal within their organization then I believe they tolerate racism."

Meanwhile, alumni from the school have sent a petition to the board calling for Aitchison to either resign or undergo equity and anti-racism training.

Former student Solana Cain, who co-created the petition, said the school holds students to rigorous standards, which indicates that those on Aitchison's list are already high performers.

"Even if this were not the case, the assumption she made was that black students and families are inherently less capable than their white counterparts," she said in a statement.

The TDSB said it received the petition and needed time to review the questions and concerns identified before responding.