Vehicles will not be able to move through a street in front of a Toronto school this week as part of a city-sanctioned project that promotes pedestrian safety.

“We hope to spark a broader conversation and dialogue that leads to broader change and actions on making our streets safe, accessible and comfortable places for everyone,” Amanda O’Rourke, the executive director of the group behind the project, said.

The group, 8 80 Cities, said this project comes at a “critical time,” as they claim at least 27 pedestrians have been killed so far this year.

The project shuts down the street in front of schools to cars during drop-off and pick-up times to “create a safer and more comfortable environment for children and caregivers walking to school,” the group said. 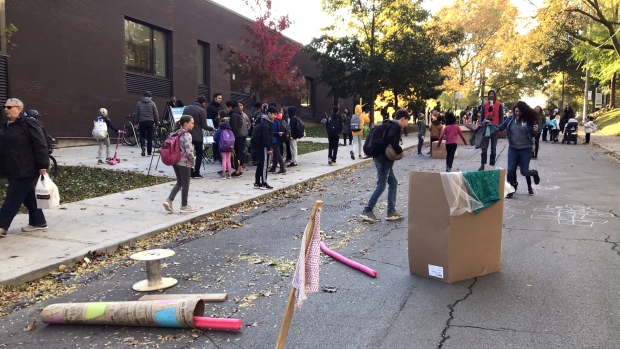 Susan Brien, who walks her kids to school every day, said she welcomes the initiative.

“I think actually more people should be walking in the city, and I actually think that the drivers need to pay better attention to pedestrians and cyclists.”

City councillor Gord Perks, who represents the area, said the project helps shine a spotlight on the road safety in Toronto.

@gordperks "behind me you have a glimpse of the future of Toronto" #VisionZero pic.twitter.com/pk1MpHcKVd

“The community has come together to give us a glimpse of our future in the city of Toronto and what we need to do to make Toronto’s streets safe for everyone,” he said.