A 53-year-old mother and her 13-year-old son are dead after a stabbing took place inside a Brampton home in the early hours of Friday.

Police said they were called to a home on Josephine Court, near Williams Parkway and Torbram Road, at around 5:45 a.m. for reports of a stabbing.

Upon arrival at the scene, officers located two victims inside the home, who were both suffering from life-threatening injuries. 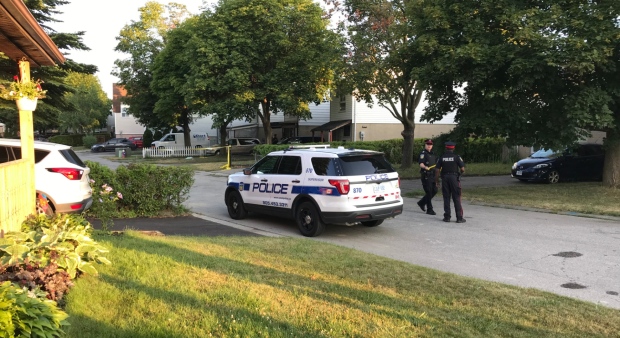 Police investigate after a double stabbing at a residential home in Brampton. (CTV News Toronto)

The mother of four was then pronounced dead at the scene, police said, and one of her children, a 13-year-old boy, was transported to hospital where he later succumbed to his injuries.

A short time later, a body was found on Highway 410 near Williams Parkway and police said the two incidents were connected.

Police later identified the deceased person as the 51-year-old husband and father of the two victims.

“After this initial incident we did have a male suspect that fled the residence in a vehicle,” Const. Danny Marttini told reporters on Friday evening. “This male has been identified as the father and spouse of the victims.”

Marttini said the man took his own life.

The names of those deceased have not been released by investigators.

“This is a family,” Marttini said. “We are dealing with a very tragic incident, the circumstances surrounding it, there are obviously members who are still having to deal with all of this, which is why we have not and are not releasing the names of the individuals involved.”

“We are really looking to respect their wishes so they can process and deal with the aftermath of this.”