Some Raptors return to Toronto with trophy 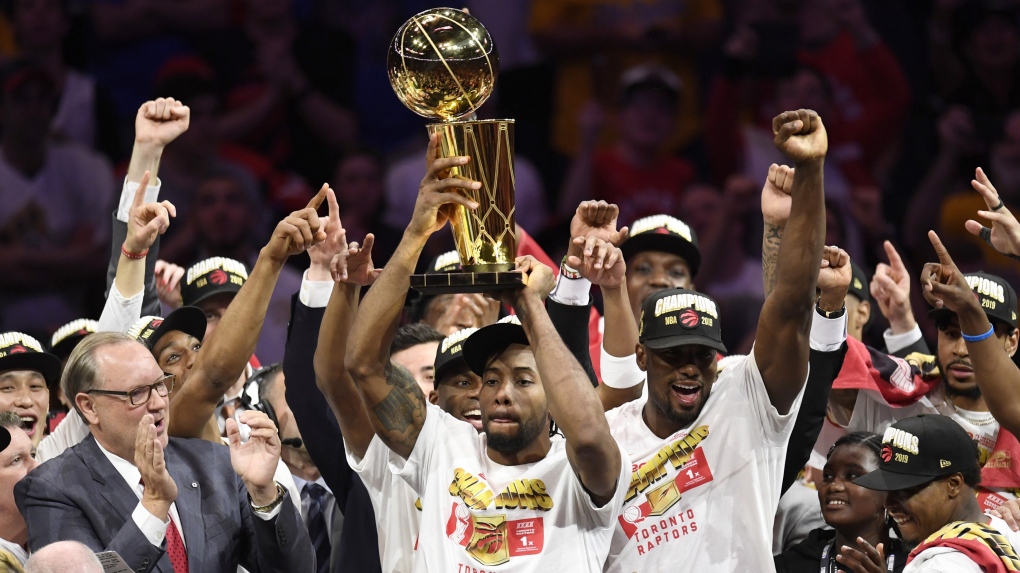 Some of the victorious Toronto Raptors are staying in Las Vegas but head coach Nick Nurse and at least five players landed at Pearson Saturday night, with their hard-won championship trophy in tow.

A spokesperson with Maple Leaf Sports & Entertainment says the whole team was originally scheduled to arrive at Pearson on Saturday at 9 p.m.

But on Saturday afternoon, the same spokesperson said most of the team decided to have one more day of fun in Las Vegas and will return to the city on Sunday.

After passing through a water cannon salute from Pearson Airport firefighters, a Delta charter Boeing 757 touched down at 9:07 p.m., and out came Fred VanVleet, Pascal Siakam, Marc Gasol, Danny Green, Jeremy Lin and Nurse, with his guitar slung behind him.

And neatly tucked into a hard case pulled carefully by two Raptors staffers, the Larry O’Brien NBA Championship trophy touched down on Canadian soil for the first time since the Raptors’ big win.

Hundreds stood on a street adjacent to the apron at Pearson to applaud the team.

Nurse then got out across the street to greet some fans and shake hands.

The team became the first franchise outside the U.S. to win the NBA Championship title by beating the Golden State Warriors in Oakland, Calif., on Thursday.

The Raptors won the series four games to two.

A victory parade and rally for the team is set to take place in Toronto on Monday. The players are expected to travel the parade route in open-air, double-decker buses with the Larry O'Brien Trophy beside them.

The parade will start at Exhibition Place and travel east on Lakeshore Avenue before heading north on York Street and then University Avenue. The procession will then briefly travel east on Queen Street and end at Nathan Phillips Square outside Toronto's city hall.

Roads will begin closing along the route around 9 a.m. and re-open after 3 p.m.

Much of Canada was swept up in the team's exhilarating playoff run, with fans celebrating long into the night after the big win, which also marked the first time a Canadian team has secured one of the big four professional sports championships since the Toronto Blue Jays won the 1993 World Series.