Some Ontario teachers are refusing work over school COVID-19 concerns 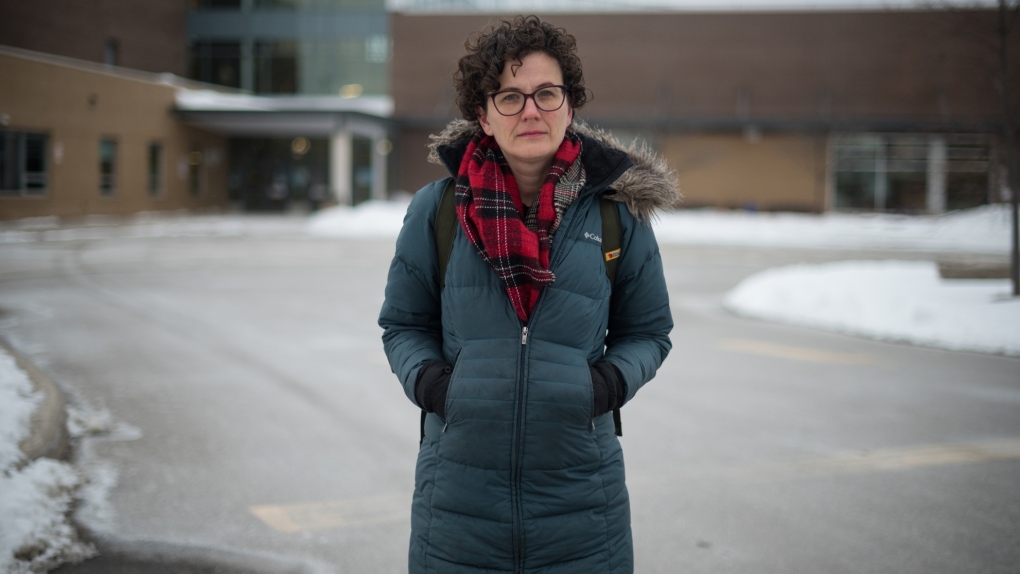 Mary Fraser-Hamilton, a teacher in Brampton, Ont., poses for a photograph outside of her school, on Monday, January 24, 2022. The Brampton, Ont., drama teacher was one of 11 education workers in Ontario who initiated work refusals last week over COVID-19 safety concerns, as students and staff members returned to classrooms with less transparency about the virus in schools. THE CANADIAN PRESS/Tijana Martin

Mary Fraser-Hamilton spent part of last week sitting in her car instead of teaching in her classroom.

The Brampton, Ont., drama teacher was one of 11 education workers in Ontario who initiated work refusals over COVID-19 safety concerns as students and staff members returned to in-person learning with less transparency about the virus in schools.

Teachers say they're concerned about lack of information on cases now that the province has cut back on testing and contact tracing, as well as ventilation standards and student mask quality. They consider individual labour action one of the last options they have to advocate for stronger safety standards in schools -- but remain worried that student safety issues are falling through the cracks.

“We aren't organizing or anything. We're all just fed up,” Fraser-Hamilton said in an interview.

People have a right to refuse work they believe is unsafe under Ontario's Occupational Health and Safety Act. Once reported, the Ministry of Labour dispatches an inspector to look into whether a hazard exists and, if so, what can be done to correct it. Investigations vary depending on the workplace and type of issue being raised.

Fraser-Hamilton initiated a work refusal on Wednesday, based on concerns about ventilation, student mask quality and adherence, lack of access to virus tests and contact tracing. She said she was also worried about the lack of a safety plan for lunchtime when students are unmasked.

By Friday, she was back in the classroom, after Ministry of Labour inspectors visited and determined that most of her concerns regarding student PPE standards weren't relevant to her individual safety as a worker, she said.

Fraser-Hamilton said the issue of ventilation is still being looked into and she's not ruling out another work refusal depending on what is discovered. In the meantime, she said she's frustrated that concerns over student masking don't fall under the ministry's purview.

“If my students can't be safe, I don't understand how anyone thinks that I can be safe,” she said. “That for me was the most frustrating part about it.”

There were 11 documented work refusals in Ontario's education sector over the week of Jan. 17, according to the Labour Ministry. Inspectors responded to them in boards covering schools in Peel Region, Simcoe County, Toronto and Hamilton-Wentworth.

A spokeswoman for the ministry did not speak to specific cases, such as Fraser-Hamilton's, but said one closed investigation was resolved internally and another four were found not to meet the criteria of a work refusal or unlikely to endanger the worker.

“The nature of the issues received involved COVID-19 safety precautions such as physical distancing, and contact tracing,” Ciara Nardelli said in an email.

The 11 education-sector refusals made up more than half of the total 18 pandemic-related work refusals that the ministry has investigated so far this month.

Between Jan. 2020 and Dec. 2021, the ministry said there were 53 virus-related work refusals in Ontario schools.

Work refusals are launched by individuals, not organized by unions.

But Ryan Harper, president of the Peel bargaining unit for the Ontario Secondary School Teachers' Federation, said members anecdotally appear more willing to take that action at this point in the pandemic.

“We have far weaker standards now in place in Ontario than what we had in December and at the same time, we have way more cases in the province,” Harper said in an interview.

“It just doesn't make sense to a lot of people that the provincial government would go ahead and remove whatever protective layers were in place in our schools at a time when we are most at risk of exposure to the virus.”

The government ordered a two-week period of remote learning this month, citing the likelihood of virus-related staff shortages from the fast-spreading Omicron variant. Classes resumed in-person this week but the province has stopped reporting information on virus cases in schools and PCR tests aren't available to most students and staff due to a restricted provincial testing policy.

Education Minister Stephen Lecce has maintained that schools are safe despite the recent policy changes, pointing to the availability of vaccines, three-layer cloth masks the province is offering to all students and rapid tests being offered to students and staff - though there wasn't enough supply for high school students to receive the tests last week.

Like Fraser-Hamilton, Pareja said she was discouraged that her concerns about student mask quality didn't appear to fall under the inspectors' scope. She has since returned to work while an investigation into school's ventilation system continues, an agreement she said was reached because the portable she teaches in has a HEPA filter installed.

She said N95 masks being provided to teachers by the province this month are an improvement, but she was disappointed that students haven't been given the same level of protection.

“What I've learned through this process that is kind of upsetting to me is that I really thought my job is to maintain student safety,” she said. “The Ministry of Labour doesn't see that as under their purview, so I feel really lost as far as, how do we protect kids?”

The Ministry of Education didn't immediately respond to a request for comment.

Despite the setback around her student safety concerns, Fraser-Hamilton said she was motivated to do something because she feels the government hasn't listened to union pushback throughout the pandemic.

“It really is boiling down to, what individual action can I take? Because that's the only thing that's left at my disposal,” she said.

This report by The Canadian Press was first published Jan. 25, 2022.

Nearly 20 officers were in a hallway outside of the classrooms at a Texas elementary school for more than 45 minutes before agents used a master key to open a door and confront a gunman, authorities said Friday.

Amid protests, NRA meets in Texas after school massacre

The National Rifle Association begins its annual convention in Houston on Friday, and leaders of the powerful gun-rights lobbying group are gearing up to "reflect on" -- and deflect any blame for -- the deadly shooting earlier this week of 19 children and two teachers at an elementary school in Uvalde, Texas.

NEW | 'Died of a broken heart': Can it really happen?

Johnny Depp's lawyers ask jury to give actor 'his life back'

Johnny Depp's lawyers asked a jury Friday 'to give Mr. Depp his life back' by finding that his ex-wife, Amber Heard, committed libel.

Monkeypox in Canada: Act now to stop it, expert urges, before it's too late

With 26 cases of monkeypox now confirmed in Canada, health officials warn that number will likely grow in the coming days and weeks. However, one expert says the outbreak can be stopped if the country works quickly to get it under control.