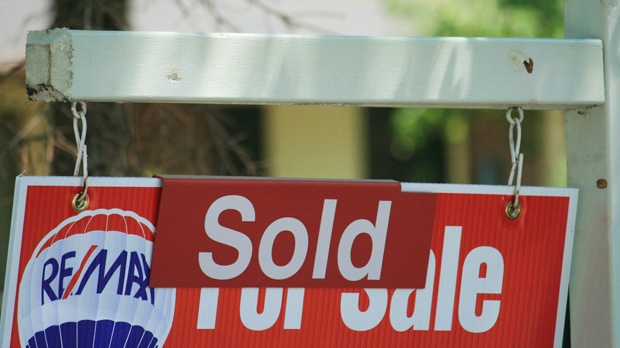 A 'sold' sign is pictured outside a house that was for sale. (Richard Buchan / THE CANADIAN PRESS)

A shortage of homes for sale across the Greater Toronto Area helped push up prices by an average of more than 10 per cent in April, a new housing report shows.

According to figures released Tuesday by the Toronto Real Estate Board (TREB), the average selling price of a home in April hit $577,898 -- up 10.1 per cent compared to the same period last year.

TREB senior manager market analysis Jason Mercer says price growth was driven by three markets: single-detached, semi-detached and townhomes in many 416-area-code neighbourhoods. He says these home types have had "no relief on the listings front," and as a result prices have jumped.

"Until we see a marked and sustained increase in listings, we should expect to see the annual rate of price growth above the long-term norm," Mercer said in a statement.

April is considered the beginning of the spring market, and is generally when monthly sales in a given year hit their peak.

Last month, home sales totalled 9,706, compared to 9,534 in April 2013. According to TREB president Dianne Usher, last month's sales levels would have been higher if not for the lack of active listings.

She points to a number of factors underlying the constrained supply of listings, including Toronto's double land transfer tax which has prompted some homeowners to stay put and renovate their rather sell.

As well, "above-trend home sales in the years leading up to the recession have meant that many households who purchased during this period simply aren't ready to move again," Usher said in a statement.