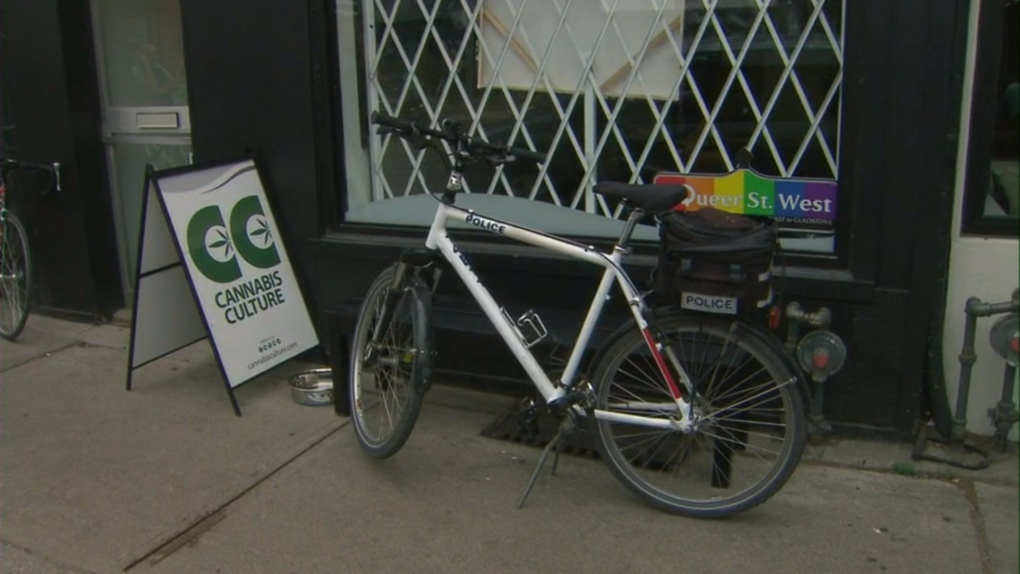 Police have executed additional search warrants on marijuana dispensaries in the GTA.

At least two more marijuana dispensaries in Toronto have been raided by police weeks after authorities arrested 90 people in 'Project Claudia.'

Both dispensaries were not raided in the initial coordinated crackdown on May 26 and have continued to sell pot for recreational use despite the ongoing investigation.

Toronto police tweeted that a total of four search warrants were executed at marijuana dispensaries over the course of Thursday.

On May 26, Toronto police targeted and raided 43 dispensaries across the GTA where 90 people were arrested and 186 charges were laid. Police said that of those charges, 71 criminal charges were laid, including several counts of possession of proceeds obtained by crime.

Cannabis Culture, whose owner is prominent pot activist Jodie Emery, declared just days following the May raids that it would continue to operate as a pot dispensary.

At the time, Emery said the shop would continue to provide marijuana and marijuana based products to anyone above the age of 19.

“We want to demonstrate what legalization should look like,” Emery said in a tweet addressed to CTV Toronto on May 30. “Together we will prove that cannabis shouldn’t be criminalized, and we refuse to be bullied by police and unjust, harmful, discriminatory law enforcement.”

The Twitter account belonging to Cannabis Culture tweeted throughout the raid on Thursday and retweeted a photo that appeared to show garbage bags fastened over the property’s windows.

Emery told CP24 that the raid at her store comes just one day after she received a letter from police indicating that they were aware that marijuana was being sold on the property.

“I have employees who are bravely working in our shop to demonstrate what legalization looks like and the only harm being done today is not by our store and not by our employees; it is the police, their enforcement and the handcuffs and the criminal charges,” she said. “The police are the ones that need to be called out. These businesses are supported by the community and we just want to be left alone.”

Police initiated the investigation on May 18 by delivering notices to owners of properties where pot dispensaries were operating. The notices advised property owners that police were aware of “unlawful activity” occurring on the premises.

The notices warned of forfeiture and charges if the operations were not ceased immediately.

A total of 78 notices were handed out to marijuana dispensaries known to be operating without a license in the city.

According to TO Dispensaries, there were approximately 100 marijuana dispensaries operating in the city prior to the raids. This is despite the fact that only those pot dispensaries that hold a special licence authorized by Health Canada can operate legally.

Currently, there are only 18 licensed producers of marijuana in Ontario.

At an unrelated news conference on Thursday, Toronto Police Chief Mark Saunders reiterated that the dispensaries are operating illegally.

"It is illegal to sell marijuana unless you have a license given to you by Health Canada. I have never minced my words on this. I said the investigation would continue and this is the result of what I said,” Saunders said.

“If you have dispensaries and they are open then your chances of going to court and being charged and convicted are very high. I strongly recommend that you stop selling marijuana in dispensaries right now because they are all unlawful.”

Saunders added that police only intend on going after dispensaries that are making money off pot.

Earlier this year, the provincial government announced it would pursue the legalization of marijuana by 2017. Pot shop owners have said that this assertion allows them to operate dispensaries within the law.