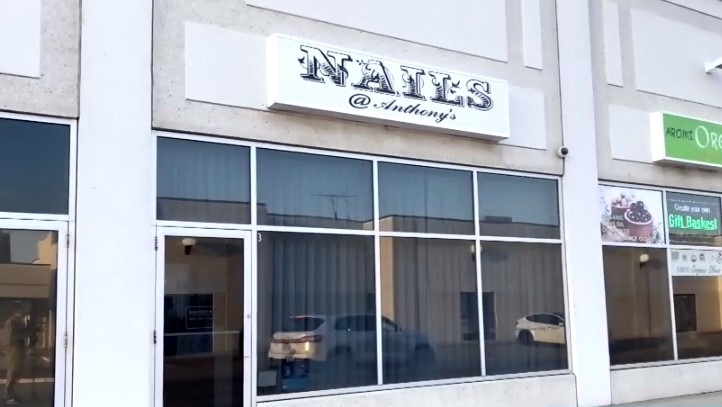 Nails at Anthony, located at 8099 Weston Road in Vaughan, is seen in this photo. (CTV News Toronto)

TORONTO -- Eighty-four high-risk contacts have been linked to a nail salon in York Region where seven staff members worked while they were infected with COVID-19, health officials say.

York Region Public Health is asking anyone who attended Nails at Anthony, located at 8099 Weston Road in Vaughan, between the dates of March 23 to 26 to self-isolate for two weeks from the date of their visit.

Officials said seven of the eight staff members at the salon have tested positive for COVID-19 variants of concern and were able to transmit the virus while they were at work. Four are from York Region while three reside in Toronto.

Officials said 84 people who attended the store have been deemed high-risk contacts.

"The salon did not properly maintain a patron list, did not track the type of service for each client nor the name of the staff who provided the service," a statement from York Region Public Health on Thursday said.

"Without a proper patron list, Public Health continues to have difficulty identifying high-risk contacts, resulting in the need for a public notice."