TORONTO -- Health officials believe the second COVID-19-related death in Ontario was linked to “local transmission,” as the man in his 50s had no recent travel history outside of Canada and was not a close contact of any known cases of the virus.

The Milton, Ont. man, who had an underlying health condition, was initially admitted to a hospital in his hometown on March 11 before being transferred to an Oakville, Ont. hospital exactly one week later.

His diagnosis of COVID-19 was confirmed to be positive at 9 p.m. that same day.

“What we see now is that at the moment we know that he did not travel outside of Canada, nor does he have a link to a known COVID-19 case and thus the indication is that there is local transmission,” Halton Region’s Medical Officer of Health Dr. Hamidah Meghani said at a news conference held on Thursday afternoon.

She went on to say that everyone across the province “needs to act now” to help curb local spread of the virus.

“This is the tragic proof that we need to work together as a community to help stop the spread of COVID-19 by practicing social distancing and taking action to protect yourself and those around you. This is a larger community issue and I know that everyone joins me in extending their deepest condolences to his family at this time.”

44 cases of COVID-19 confirmed in Ontario

Provincial health officials confirmed 44 cases of the virus in Ontario on Thursday, including the deceased, bringing the provincial total to 258.

As the new patients were confirmed, officials stated that nearly 4,000 people are currently under investigation for the virus and more than 12,000 people in Ontario have tested negative thus far.

In the province, five people previously infected with the virus have since recovered, while two people have died.

The first COVID-19-related death in Ontario was confirmed on Tuesday. The patient was a 77-year-old Barrie man, who was receiving care at a hospital in Muskoka Region.

At the time, officials stated that it was unclear whether the novel coronavirus was in fact the man's cause of death. However, on Thursday evening Ontario's ministry of health confirmed that the patient died as a result of COVID-19. 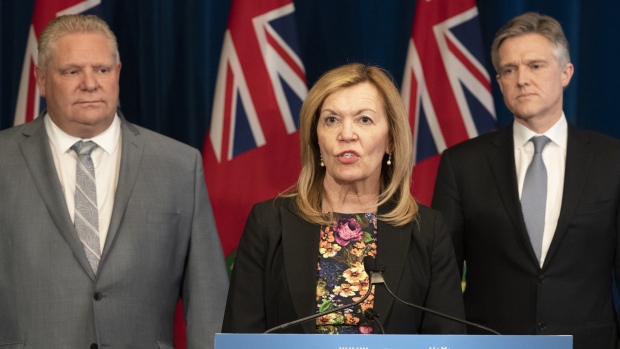 The new cases announced on Thursday morning include eight people in Toronto, three in Peel Region, two in Hamilton, two in Halton Region, and one in Eastern Ontario, Durham Region, Waterloo and Haliburton Kawartha.

The 22 other patients’ locations are listed as “pending.”

Among the cases, 12 are travel-related, one is listed as being a close contact of another patient and the remaining 30 have their means of transmission listed as “pending.”

One of the patients, a man in his 80s in Durham Region, is the only person listed as being hospitalized due to the virus. The rest are in self-isolation or listed as “pending.”

Ontario's Chief Medical Officer Dr. David Williams reacted to the 44 new cases reported in the province on Thursday saying that the number was "surprisingly low."

"That still seems to me surprisingly low with the flow we've got coming, but I will be not surprised that goes up. I don't want it to go up huge. So we'll have to watch."

Health officials said “most people with common human coronavirus illnesses will recover one their own,” but added that “if you need immediate medical attention you should call 911 and mention your travel history and symptoms.”