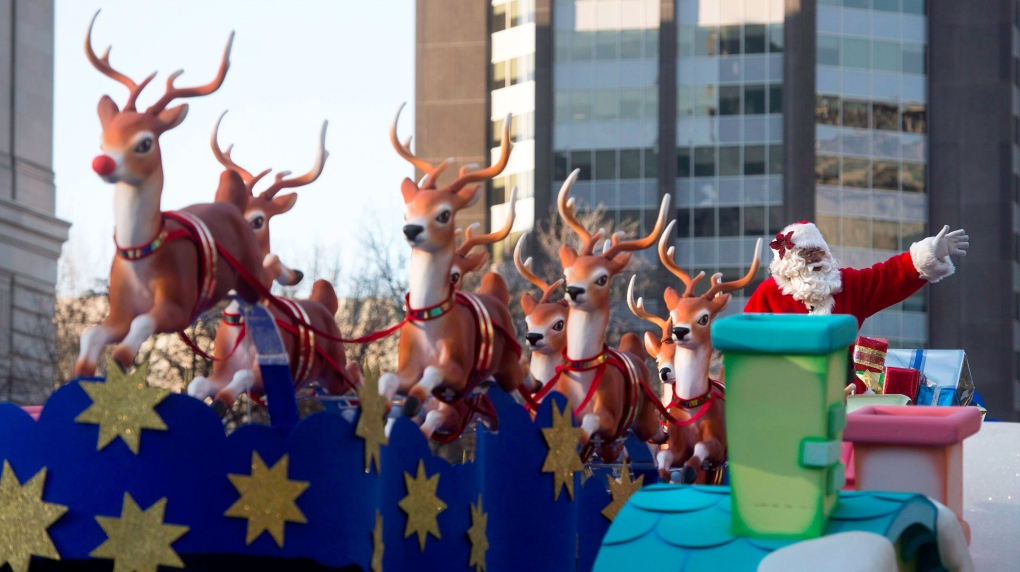 TORONTO -- For the first time in its more than 100-year history, the Santa Claus Parade in Toronto will go ahead without a crowd lining the parade route.

On Friday morning, officials announced that the parade, which will air on Dec. 5, will be televised as part of a two-hour special.

"Despite the ongoing pandemic, we've found a way to make sure Santa Claus is still coming to town. I am pleased that this tradition will continue in a way that families can safely enjoy," Mayor John Tory said in a written statement released Friday.

The event, which will be staged in a closed set parade route, will air at 7 p.m. on CTV and CTV 2.

"They are not going to have a regular parade because of the obvious crowd implications," Mayor John Tory told CP24 on Friday, adding that the televised version will be "spectacular."

"It is going to be as colourful and interesting as anything you've ever seen," he said. "(It is) the same one you are familiar with. A lot of the floats and bands and the whole thing."

A series of popular festivals and events have been cancelled this fall and winter in the wake of COVID-19 pandemic, including the Distillery District Christmas Market and the New Year's Eve celebration in Nathan Phillips Square.

When asked about how people should proceed with Thanksgiving next weekend, Mayor Tory said residents should prepare for a much smaller gathering.

"Our medical officer has begun to say to people, I think quite explicitly, please do not assume you can just have a big family crowd scene. As much as we love those," he said.

"What we are saying for now is plan on just celebrating Thanksgiving with the people you live with directly because that is going to be safe for COVID-19."

He said the city plans to provide guidance on Halloween soon.

"We haven't yet turned to Halloween... it is a little further away at the end of October and it is not as urgent as Thanksgiving," he said.

"I don't have the power to cancel it... (We are) trying our best to come to a positive answer if we can but we'll have to do what we think is right in the context of the public health numbers."

CP24 and CTV are divisions of Bell Media