Friends and family gathered at a funeral service Thursday to remember Sammy Yatim, the 18-year-old who died after being shot by Toronto police on a streetcar last weekend.

Yatim's younger sister Sarah gave a stirring eulogy for her brother, remembering his sense of humour and vowing to fight for him and see that justice is served, Cherry said.

"Please, everybody, let's be strong. Stop with the tears and start with the action," Sarah Yatim said. "He wasn't the first to die this way but hopefully he can be the last."

Yatim’s sister wore a T-shirt bearing her brother’s photo and the words “9 shots…?” referencing the number of gun shots heard in a bystander video.

It was Yatim's sister who identified her brother's body after the shooting, as their parents were out of town at the time.

Four of Yatim’s friends also gave a eulogy, saying how the teen had an infectious smile and, in spite of his sometimes tough-guy exterior, he was a sweetheart on the inside.

Though Yatim’s life was unexpectedly cut short, Estephanos Issa, the priest who led the Syrian Orthodox Church service, urged mourners to remember Yatim for the full life he lived, and not just the manner in which he died.

He added that Yatim’s family did not hold any ill will against the police force.

"I haven't heard one single word from the mouth of the parents or the sister that expresses rage or revenge against the police officer who did the shooting," Issa said. "We have not come to seek revenge."

Yatim’s mother sat in front of her son’s open casket throughout the service. The visibly shaken woman could be seen burying her head in her arms or reaching out toward her son.

Family friend Joseph Nazar told reporters before the service that Yatim's mother is struggling to accept the loss.

"This is the only boy… he's been taken away from this family," Nazar said. "The mother is very devastated… she could not even stand on her feet yesterday. She (kept) holding the boy and keeps saying 'He's still cold. He's not getting warm.'"

Nazar also said the family is expressing some disappointment in the police response to Yatim's death, noting that Police Chief Bill Blair is not expected to attend the service and there are no signs of police condolences.

Yatim's death has sparked public outrage after video of the incident recorded on bystanders’ cellphones was posted online.

The videos -- in which police are heard shouting at Yatim to "drop the knife" as he paces the empty streetcar before nine gunshots can be heard -- have prompted accusations that excessive force was used.

Yatim is seen dropping to the floor after the initial three shots are fired. The Special Investigations Unit later said a Taser was also used during the incident.

CTV News identified the officer involved in the fatal shooting as Const. James Forcillo, a six-year veteran of the force. He has been suspended with pay as the province's police watchdog, the Special Investigations Unit, continues its investigation.

On Wednesday, Ombudsman Andre Marin addressed the incident and said his office is evaluating whether to launch a full investigation into use-of-force protocols.

With files from CTV Toronto's Tamara Cherry and The Canadian Press 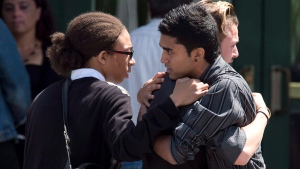 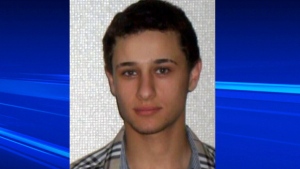