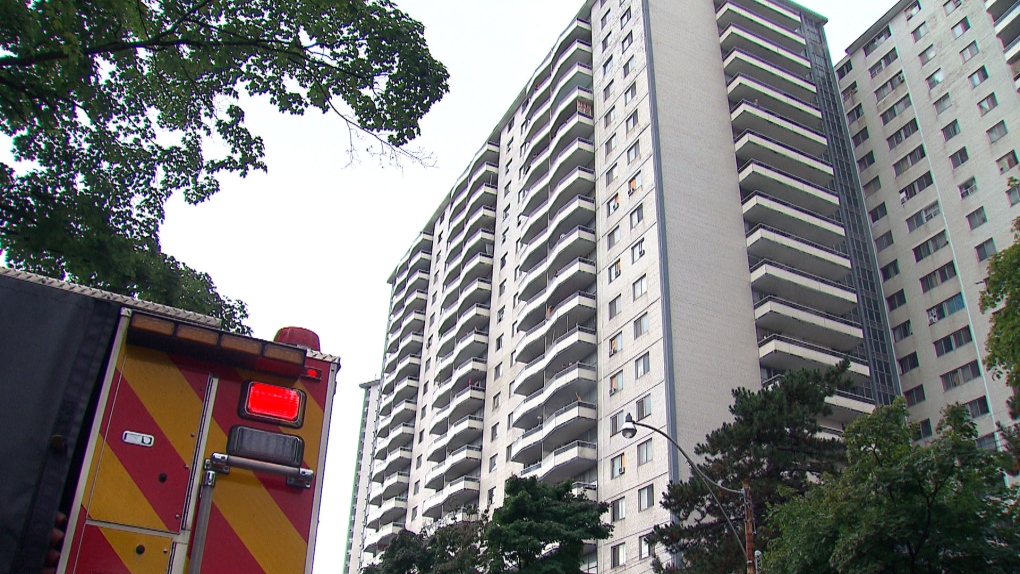 The exterior of 650 Parliament Street is seen. (CTV News Toronto)

Work to restore a St. James Town highrise that was the site of a massive six-alarm fire last summer is now about two-thirds complete and officials say that residents may be able to return to the building in November.

The fire at 650 Parliament Street on Aug. 21, 2018 caused significant damage to the building’s electrical system, displacing an estimated 1,500 tenants.

Those residents were initially told that they would be able to move back into their units in early 2019, however the timeline for their return was subsequently pushed back multiple times as the scale of the work required to rehabilitate the building became clear.

The latest estimate that was given to residents in March indicated that they would not be able to return until this fall at the earliest. At a news conference on Wednesday, WPSQ Management Spokesperson Danny Roth said that estimate still holds up with November now pegged as the likeliest timeline for reoccupation of the building to begin.

“The damage was significant. There is not a strong enough superlative to say just what the effect of the fire was,” Roth said. “I can tell you that not one resource in human power or in dollars spent has been delayed. Every conceivable resource has been brought to bear on the reconstruction process but what is important to realize is that we are essentially rebuilding a 22 story tower from the inside out. So save for the fact that we didn’t have to rebuild the exterior, the same process is at stake in terms of looking at the electrical systems, the mechanical systems, the venting plus the obvious issues related to cosmetic changes.”

Roth said that there have been an average of 171 workers on site at the building since the fire with about 232,000 person hours of labour going into the renovations to date.

He said that most of the work that remains is essentially “finishing work.”

To accommodate that work, Roth said that a decision has been made to begin the arduous of packing up residents belongings and moving them to a secure storage facility that has been set up in the building’s basement. That process will begin next week and unfold over several months, he said.

Looking ahead to the reoccupancy of the building, Roth said that move-ins will have to be staggered over a period of days or weeks, meaning not everyone will be able to return right away.

He said that despite the significant costs incurred by the building’s ownerships, there is not currently any plans to seek an above-guideline rent increase from the Landlord and Tenant Board.

“There is a moral and ethical position that has been taken to recognize just how difficult this situation has been and the priority is not to get another three per cent a year; the priority is to get people home,” he said.

Roth said that about 10 per cent of tenants at the building have either chosen to terminate their lease or had their leases come to a close since the fire.