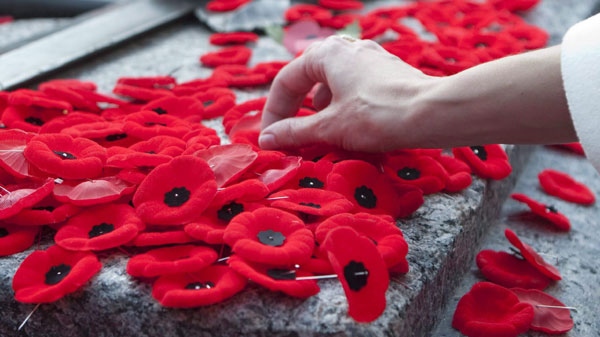 A hand reaches out to place a poppy on the Tomb of the Unknown Soldier following Remembrance Day ceremonies in Ottawa, Wednesday November 11, 2009. (Adrian Wyld / THE CANADIAN PRESS)

TORONTO - A major international retailer's efforts to advertise its fall clearance event as a "Remembrance Day" promotion is proving to be a tough sell for Canadians.

Civilians also cried fowl on social media sites, lambasting the retailer for what they described as an "insensitive" approach.

Eddie Bauer announced the sale early Friday morning in an email flyer promising up to 75 per cent off fall merchandise.

Ed Carter-Edwards, who served in the Canadian Air Force during the Second World War and spent time as a prisoner of the Germans, was outraged by the company's announcement.

"That's horrible. I don't know what other word to use," Carter-Edwards said in a telephone interview. "(It) should be a day of admiration, respect and honour for veterans, not to be drawing people to a sale. How can anybody be so low as to do something like that? It's a dishonour to veterans."

The Royal Canadian Legion echoed Carter-Edwards' condemnation of the sale.

Director of Communications Bob Butt said the veterans' advocacy organization did not support the idea of putting a commercial spin on Remembrance Day, saying the day of commemoration was not meant to be treated as a holiday.

"The Royal Canadian Legion does not like the fact that he's using Remembrance Day as a sales pitch," Butt said of the company.

"A Remembrance Day sale for REAL? Sigh...tacky," read a tweet from Ngodbout.

Eddie Bauer did not immediately respond to calls and emails requesting an interview.

The decision to promote a clearance sale as a remembrance event was likely rooted in a long-standing American retail tradition, experts said.

Elizabeth Evans, director of the School of Retail Management at Toronto's Ryerson University, said Eddie Bauer has been holding successful "Veterans Day" sales in the U.S. for years.

It is hardly alone in doing so, she said, adding major retailers including Macy's often run promotions to coincide with the U.S. equivalent of Remembrance Day.

"This, in my estimation, is the type of thing that can happen when a foreign company makes an assumption that what works for them in one country will automatically resonate with the consumers in another country," she said. "Probably they're getting the reaction that would suggest that that's not necessarily the case."

That view is shared by Andrew Cohen, president of the Historica Dominion Institute -- an organization dedicated to preserving Canadian memory and identity.

"I would say probably that if you're alienating a group of people, if indeed you are, as a retailer it's not a good idea. It's unusual and risky for Eddie Bauer."

Cohen and Evans said Canadians are not accustomed to treating Remembrance Day as an occasion for fun and celebration, despite the fact the Canadian government recognizes it as a statutory holiday.

The idea of engaging in retail therapy on Nov. 11 is appalling to Carter-Edwards, who said the solemn occasion should be reserved for honouring fallen soldiers.

"No way should anybody use veterans other than for respect and admiration," he said. "Using the name for selling clothes or whatever? That's horrible."