Raptors will celebrate NBA title with parade and rally on Monday

The Toronto Raptors will celebrate their NBA championship with a parade through the city followed by a rally at Nathan Phillips Square on Monday.

The parade will get underway at 10 a.m. at Exhibition Place’s Princes’ Gates and will then head east on Lakeshore Boulevard before turning north onto York Street and University Avenue and finally heading east on Queen Street to Nathan Phillips Square.

The parade is scheduled to arrive at Nathan Phillips Square by 12:30 p.m., at which point there will be an hour-long rally to celebrate the Raptors first NBA championship. The entire event will be broadcast live, starting at 10 a.m., on CTV, CP24, CTV News Channel and TSN.

On Friday, workers could already be seen erecting a stage at Nathan Phillips Square for the celebration.

“This means so much to our city and to many in Canada, and we are looking forward to showing everyone the Larry O’Brien trophy on Monday,” Raptors President Masai Ujiri said in a press release announcing the plans for the parade. “Bringing the NBA Championship to Toronto is the realization of a goal for our team and for our players and we are thrilled to be able to celebrate together with our fans.”

Players will be carried down route in double decker buses

The championship parade will feature open-air double decker buses carrying members of the team, along with the Larry O’Brien trophy. 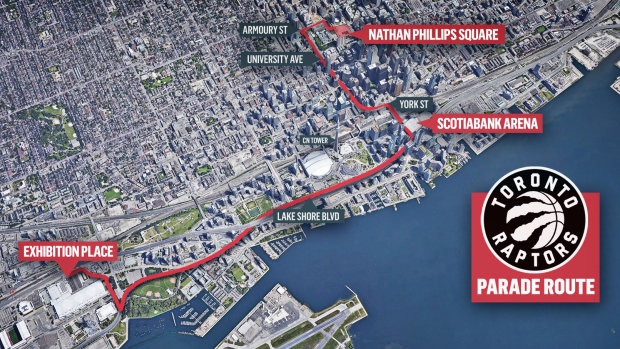 Speaking with CP24 earlier on Friday, Mayor John Tory said that he is hoping that employers show some flexibility so that as many residents as possible can line the route.

In 2018, officials estimated that more than a million people attended the Golden State Warriors victory parade, which was the team’s third in four years. Monday’s parade in Toronto will be the first celebrating a championship in one of the so-called big four sports (NHL, NBA, NFL, MLB) since the Blue Jays won the World Series in 1993.

“People have asked me all week if I could declare a holiday. I wish I could, I would have done it before now and for lesser occasions. But I would say to the employers, get in the game here and tell your employees that they can go to the celebration on Monday,” Tory said on Friday. “This is going to be big and people should be allowed to be part of it. So all you employers out there: please let people celebrate. How often does this happen?”

Environment Canada says that it will be cloudy on Monday with a 60 per cent chance of showers. The expected high is 22 C.