Raptors' Barnes, Trent Jr. and Young are doubtful for Game 2 against Philadelphia 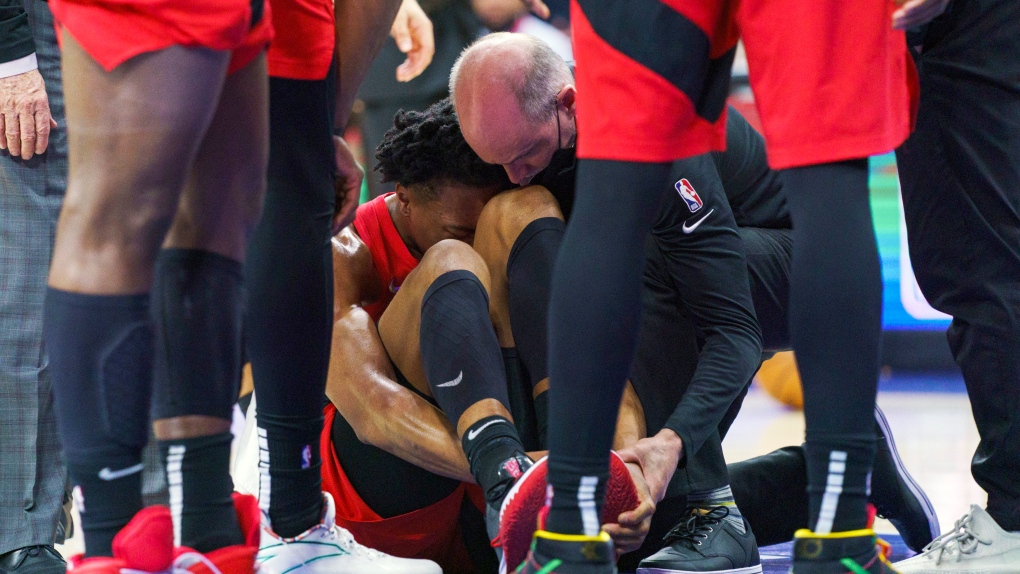 Toronto Raptors' Scottie Barnes, center, gets looked over by the training staff after injuring his left leg during the second half of Game 1 of an NBA basketball first-round playoff series against the Philadelphia 76ers, Saturday, April 16, 2022, in Philadelphia. The 76ers won 131-111. (AP Photo/Chris Szagola)

The Toronto Raptors could be without guard Gary Trent Jr. and forwards Scottie Barnes and Thaddeus Young for Game 2 of their NBA playoff series with the Philadelphia 76ers.

Both Barnes (ankle) and Young (thumb) were injured in Saturday's 131-111 Game 1 drubbing to the Sixers, while Trent Jr. is dealing with a non-COVID related illness.

Barnes, an NBA rookie of the year candidate, was having an excellent playoff debut, with 15 points, 10 rebounds and eight assists, before the Sixers' 280-pound centre Joel Embiid stepped on his foot, sending him sprawling to the floor in agony with about nine minutes left to play.

Young left the game after damaging his thumb in the second quarter.

The ailing Trent Jr., who averaged 18.3 points per game in the regular season, struggled in the playoff opener, scoring just nine points on 2-for-11 shooting in 26 minutes of work.

Meanwhile, team was awaiting results of the MRIs performed on Barnes and Young on Sunday.

All-star guard Fred VanVleet, who missed 11 of Toronto's final 24 regular-season games with a bruised knee, said dealing with injuries and adversity is nothing new for the Raptors.

"We've played without guys all year, obviously at this time of year you would like to have all your best players but we'll see what the situation is, find out in the morning who's in, who's out and then it'll be time for somebody else to step up," he said.

VanVleet said the team has responded to adversity all year and will have to do it again when they hit the floor short-handed on Monday night.

The Raptors looked overwhelmed by the 76ers in Game 1 and VanVleet admitted the team was "little soft and a little slow" in the road opener, something he chalks up to the Raptors' inexperienced lineup.

"We are a young team, let's not forget that. I know we played well and we got hot towards the end of the year but this was a good wake-up call for a lot of guys," said VanVleet, who had 18 points and six assists in the opener.

The series will head to Toronto for Game 3 on Wednesday and Game 4 next Saturday.

This report by The Canadian Press was first published April 17, 2022.