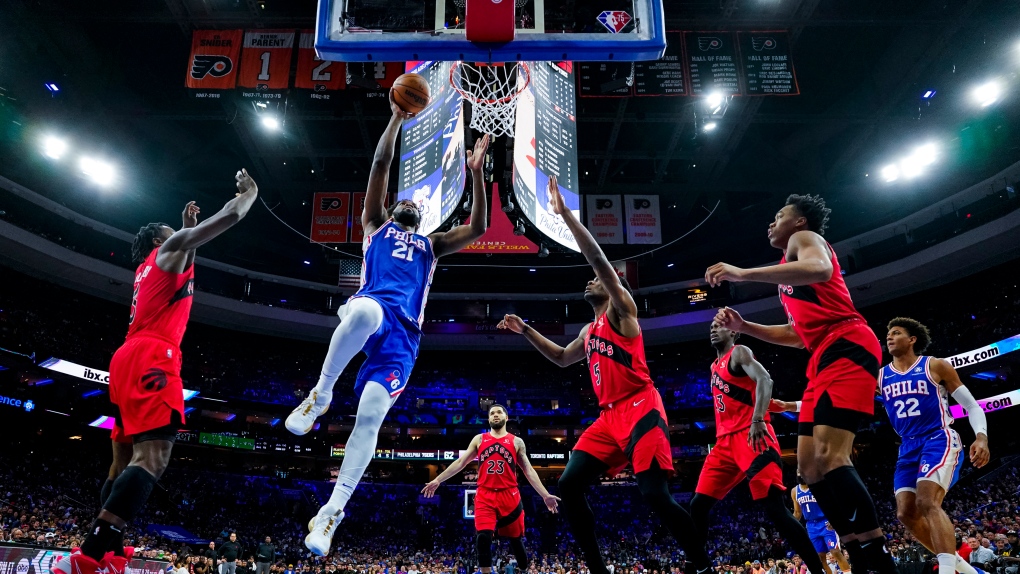 Philadelphia 76ers' Joel Embiid, center left, goes up for the shot against the Toronto Raptors during the first half of Game 1 of an NBA basketball first-round playoff series, Saturday, April 16, 2022, in Philadelphia. (AP Photo/Chris Szagola)

PHILADELPHIA -- Tyrese Maxey scored 21 of his 38 points in the third quarter Saturday to stuff any Raptors' hopes of a comeback, and the Philadelphia 76ers beat Toronto 131-111 in Game 1 of their opening-round playoff series.

Pascal Siakam had 24 points on a rough night for the Raptors, who saw rookie Scottie Barnes helped off the court with a left ankle sprain and Fred VanVleet foul out early in the fourth quarter. OG Anunoby chipped in with 20 points.

Barnes had 15 points and 10 rebounds in an excellent playoff debut before Sixers' 280-pound centre Joel Embiid stepped on the rookie's foot sending him sprawling to the floor in agony with 9:06 to play. VanVleet had 18 points and six assists before leaving the game on the same play.

Embiid had 19 points and 15 rebounds.

The Raptors fell to 5-17 all-time in playoff series openers. Game 2 of the best-of-seven series is Monday at Philadelphia.

It was the first post-season meeting between the Atlantic Division rivals since Kawhi Leonard's buzzer-beater dispatched Philly in the 2019 conference semifinals.

Barely a week after the Raptors clawed back from a 17-2 deficit to beat Philly 119-114 in Toronto -- the Sixers' only loss in their final six games of the regular season -- there was no second-half heroics on Saturday.

The Sixers' 21-point lead in the second quarter had become 24 by early in the third. Achiuwa drove past Embiid and picked up a foul. His three-point play at 5:56 of the third capped a 10-2 run that sliced the difference to 11 points and breathed some life into the Raptors. But Maxey almost single-handedly put a quick stop to Toronto's momentum with his huge third quarter, and the Sixers led 107-88 with one quarter left.

The Raptors unravelled in the fourth and Shake Milton's three-pointer with 7:34 to play put Philly up by 23 in front of the raucous Wells Fargo Arena crowd. Boucher, who had seven points on the night, fouled out with 5:27 to play. Maxey's jumper with 3:19 to play had the Sixers up by 22 and both coaches emptied their benches soon after.

The Raptors' identity is about turning teams over and winning the offensive rebound battle, but the Sixers beat the Raptors at their own game on Saturday. Philly grabbed 10 offensive boards to Toronto's seven, and committed just four turnovers to the Raptors' eight.

The Raptors won their regular-season series 3-1 versus Philly, and, like the 76ers, finished the season on a roll, winning 14 of 18 down the stretch.

But the Sixers dominated from the outset, grabbing six offensive boards in the first quarter to Toronto's two. They built a 10-point lead and led 35-27 to start the second.

A running dunk from Anunoby capped a 5-0 Raptors run to open the second quarter. It sliced the difference to just three points, but the momentum was short-lived as the Sixers replied with a 9-0 run and by the time Harris knocked down a three with 1:12 left in the half, Philly was up by 21 points. The 76ers led 69-51 at halftime.

The series heads home to Toronto for Games 3 on Wednesday and 4 next Saturday. Because of the COVID-19 pandemic that saw the 2020 season end in the Disney World "bubble" and a 2021 season that saw the Raptors tumble down the standings amid a COVID-19 outbreak to finish 12th in 2021, it will be the first time Scotiabank Arena has hosted playoff basketball since Game 5 of the NBA Finals.

In Toronto on Saturday, fans gathered in "Jurassic Park" outside Scotiabank Arena to watch the game on the giant screen. Fans hadn't gathered there to watch playoff basketball in 1,045 days, since the Raptors beat the Golden State Warriors to win the 2019 NBA championship.

The series will head back to Philly for Game 5, if needed.

This report by The Canadian Press was first published April 16, 2022.