TORONTO -- Anti-Black racism protesters painted “defund the police” on College Street outside of Toronto police headquarters Friday in a message that was hard to miss.

The message was painted in large pink lettering that nearly spanned the width of the street Friday morning.

Protesters outside of police headquarters also chanted for the defunding of police and sat in the street holding signs.

College Street has been completely closed from Yonge Street to Bay Street to accommodate the protest.

In a twin protest at Nathan Phillips square, protesters scrawled “abolish the police.”

The protests comes as Black people in the U.S. and around the world mark the Juneteenth holiday commemorating the end of slavery in the United States. The holiday marks the date in 1865 when slaves in Texas were told that they were free, some 30 months after the Emancipation Proclamation.

While that milestone in the end of slavery came 155 years ago, recent police killings of Black people have brought to light the glaring inequalities and societal racism that remain.

Governments and corporations have been rallying to recognize anti-Black racism as a systemic problem in society since an outpouring of anger over the video-recorded police killing of George Floyd on May 25 in Minneapolis, Minn. sparked global protests.

One of the rallying cries from protesters has been a call to defund police services. While some have advocated doing away with the current policing model altogether, others have suggested that some of the funds allocated to traditional policing could be better spent on mental health services and social programs that might stem some of the problems that police deal with. 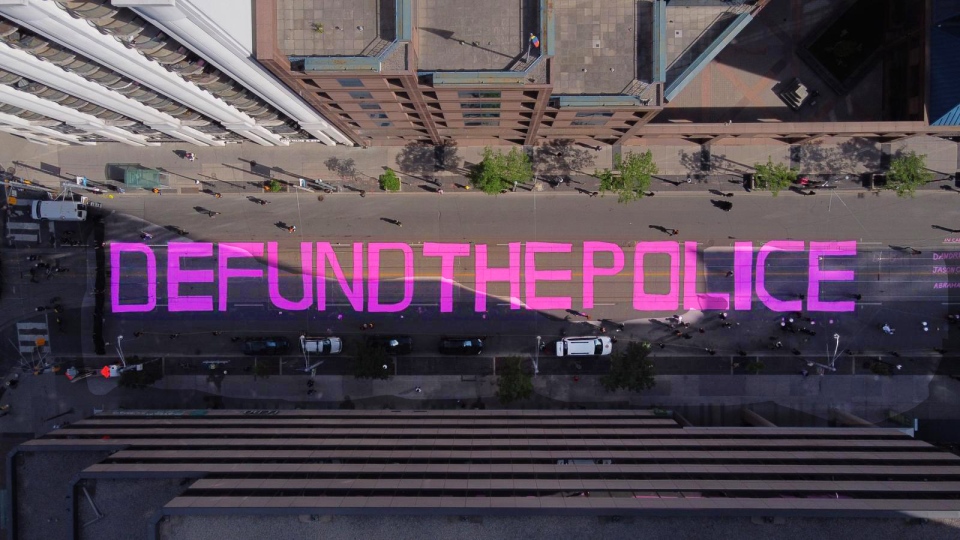 In Toronto, the annual police budget of around $1 billion usually comes in as the single largest line item in the city’s overall budget.

The protests came as the Toronto Police Services Board held a meeting and agreed on additional consultation with the public about the chair’s report on confronting anti-Black racism.

Mayor John Tory said the decision was “the right thing to do” and would allow the board to engage in broader consultation, as well as with its own advisory panels.

“I believe all of this demonstrates the board is absolutely committed to reform, to confronting systemic racism in to making sure that we are listening to people and to getting on with the making of changes,” Tory said. 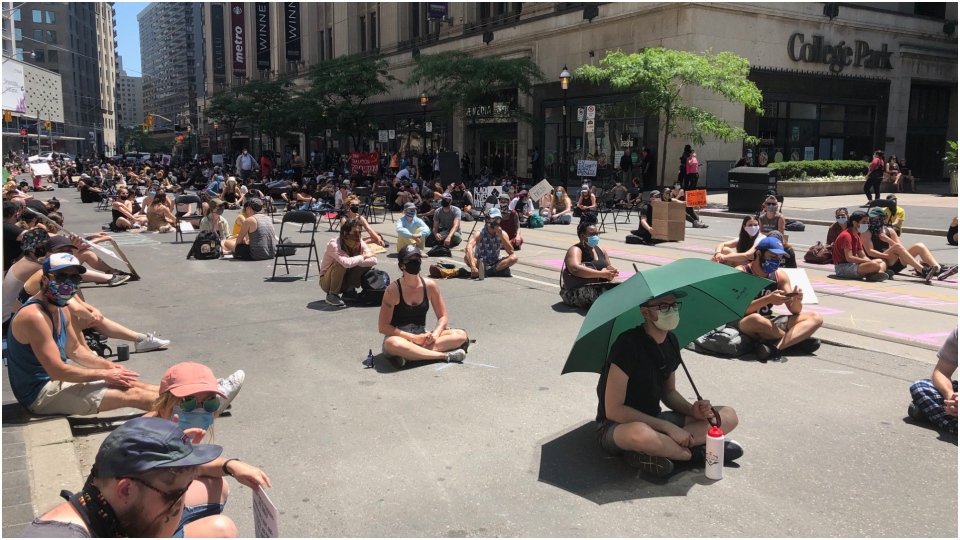 He said a forum will be held in early July to hear directly from the public.

“I fully support accelerating the pace of police reform in the city and I believe the board was clear today that we are committed to making real, tangible changes that will examine the questions of what police do, what they should be doing going forward, and how they do it,” Tory said.

He added that “sensible, reasonable police reform must happen and I am committed to making sure with my colleagues that it does happen.”

Sit in shuts down College Street between Bay Street and Yonge Street. People clapping and saying Black lives matter’ and ‘abolish the police’. Protest falls on Juneteenth, a day celebrating the liberation of slaves in the United States. @CTVToronto pic.twitter.com/kbI9b8tMZz

The GTA has seen numerous protests, nearly all peaceful, over the past few weeks.

Chief Mark Saunders notably took a knee with protesters in one of the early marches.

Saunders, who has announced that he will be stepping down from his post at the end of July, has said that funds should not be diverted from TPS unless there is reliable infrastructure to deal with the issues that might be offloaded from police.