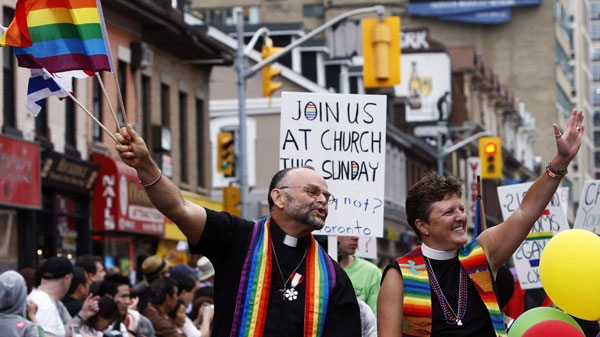 Revellers celebrate during the annual Pride Parade in Toronto on Sunday, June 28, 2009. THE CANADIAN PRESS/Nathan Denette

The board of the annual Pride Toronto parade has reversed its decision to ban the term "Israeli apartheid" from its events.

Instead of banning members of the group Queers Against Israeli Apartheid from taking part in Pride-related events, all participants must now read, sign and abide by the City of Toronto's Declaration of a Non-Discrimination Policy.

It will then be up to parade participants to police their own activity.

In banning use of the term "Queers against Israeli apartheid" from their events, Pride Toronto said it supported freedom of speech, but could not allow the group to march due to threats of violence and their funding being pulled.

Although Queers Against Israeli Apartheid marched in the annual gay parade for the past two years, the name angered some who believed it is anti-Semitic.

Responding to the reversal, a member of Queers Against Israeli Apartheid praised the "victory."

"The Israel lobby learned a tough lesson today about our community’s proud history of standing up to censorship and human rights abuses," Tim McCaskell said in a statement.

"Due to Pride Toronto's decision, the gay community and its friends will now be exposed to vicious lies about Israel," Frank Dimant said in a statement.

The decision to ban the phrase was first made in May, in response to pressure from the City of Toronto politicians and Jewish advocacy groups.

The move was met with widespread condemnation as more than 20 current and former grand marshalls of the Pride parade returned their awards in protest.