TORONTO -- Premier Doug Ford says that he will not hesitate to order the closure of any construction site that is not taking the necessary steps to help protect its workers and limit the spread of COVID-19.

The province has ordered all non-essential businesses to close by midnight but it is exempting those that fall into 74 categories deemed essential to the supply chain and day-to-day life, including the construction industry. 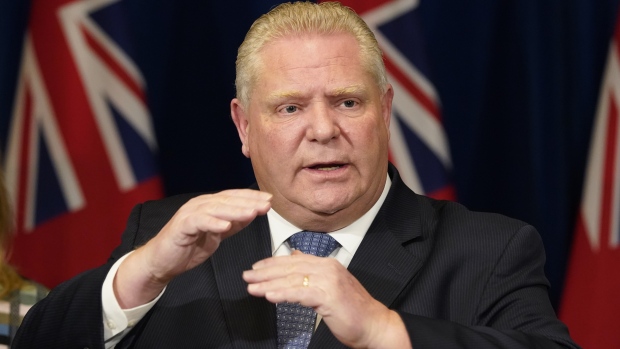 At a news conference at Queen’s Park on Tuesday afternoon, Ford said that while he believes that construction must continue during the pandemic he has “put the industry on notice” regarding their duty to protect workers and take necessary precautions to promote social distancing.

“Our chief prevention officer has sent our new guidelines for construction sites and there are currently dozens of provincial labour inspectors at numerous large job sites to ensure appropriate protocols are in place,” he said. “These inspectors will not hesitate to shut sites down. Let me be clear if the industry does not take every step necessary to look after their workers I will shut them down because this is first and foremost a public health emergency.”

Tory says some sites should be closed

Ford’s comments on Tuesday come amid an increasing number of calls for construction sites to be shut down.

In an interview with CP24 earlier in the day, Mayor John Tory said that some sites where workers can’t be kept apart from one another due to tight confines should practice “good corporate citizenship” and shut down, despite an exemption from the province that allows them to continue operating.

“The list looks long so as usual I think we are going to have to continue on the good judgement and cooperation of people who don’t try to find a loophole in this very long list,” Tory told CP24 on Tuesday morning, noting that the list has to be long in order to avoid unintended effects on the supply chain. “There needs to be good corporate citizenship here and a respect for the spirit of what is intended.”

The provincial order specifically exempts “construction work and services, including demolition work, in the industrial, commercial, institutional and residential sectors.”

Tory, however, said that he has had extensive discussions with representatives from the construction industry who have conceded that that there are some jobs where it is just not possible to respect social distancing guidelines, given the relatively tight confines that often result in workers being “shoulder-to-shoulder.” 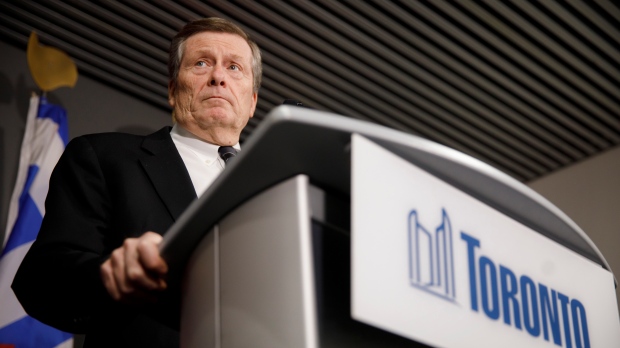 He said that those sites ought to be shut down.

“I believe that those kind of sites will close, if not because the company says so then because the workers will just say ‘You know what, we are not safe here.’ There just needs to be an element of good faith and common sense,” he said.

Think tank calls for immediate shut down of work sites

Governments have implemented increasingly restrictive measures to enforce social distancing in recent days but have so far resisted calls to shut down work sites.

On Tuesday a construction industry think tank added its voice to the fray, calling on the Ford government to revisit its list of essential services and immediately shut down all work sites for 14 days.

“It makes no sense that you can’t have your neighbour over for a cup of coffee yet construction sites are expected to continue operations and they can have hundreds of employees working in close proximity to each other,” Ontario Construction Consortium Executive Director Phil Gillies said in a news release. “This is contrary to the best advice of public health officials to maintain social distancing.”

Construction industry may have to change its practices

While most constructions sites are continuing to operate amid the pandemic, it is not exactly business as usual. 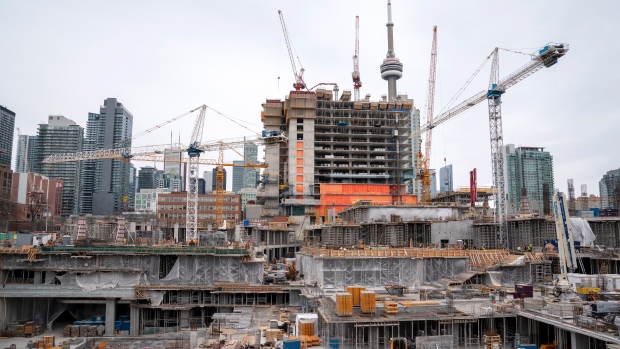 Richard Lyall, who is the president of the Residential Construction Council of Ontario (RESCON), said that most companies have already begun staggering shifts so that social distancing can be maintained by workers.

He said that in instances where the nature of the work makes that difficult, the industry will “just have to change our practices.”

“That means of course that work is going to slow down and we are going to have to have lower output but so be it. That is just going to have to be something that we are going to live with because COVID-19 is not just going to be with us for another three or four weeks or two months or three months, COVID-19 is likely going to be with us for the next 12 to 18 months and that is why a two week shutdown (of the construction industry) for example just wasn’t realistic.”

Speaking with CP24 on Tuesday morning, one man who works at a construction site downtown said that it can be hard to maintain social distancing given the interconnected nature of many job sites.

The worker said that is especially true when scaffolding is involved, as is the case with most high-rise construction.

The worker said that his employer is doing everything it can by providing heated bathrooms with sinks and hand sanitizer but challenges remain.

“It is tough because you ware working in close proximity to guys. You got to have guys hand you stuff and sometimes the whole social distancing thing can be hard to maintain,” he said. “The guys are definitely concerned. We all have wives and small children at home and we definitely want to keep them safe but we are doing what we do.”

35,000 units of housing still under construction

While there was some pressure on Ford to order the closure of some construction sites, many of which are staffed with hundreds of workers, Lyall said that doing so would have been short-sighted.

He said that there are currently about 35,000 units of housing under construction in the province and people “are counting on them” being completed.

“We have shortages of housing, infrastructure problems, we have got transit projects that are two years behind, we have a lot of things that need to get built so the premier did the right thing here,” he said.