Toronto police say they are investigating a homicide after the dismembered remains of a female victim were found in a garbage bag in the city’s east end and they are asking for help to identify her.

The remains were found on a Leslieville sidewalk on the south side of Eastern Avenue at Berkshire Avenue, west of Leslie Street, at around 1:30 p.m. on Monday.

“I'm appealing to members of the public who were in the area of Berkshire Avenue and Eastern Avenue between the hours of 10 a.m. to 1:30 p.m. yesterday to contact police,” Det. Sgt. Christopher Ruhl told reporters at the scene Tuesday evening.

He said the body had sustained obvious trauma and police determined the woman's death to be a homicide following a post-mortem examination.

“If you observed anyone in that area pushing a foldable shopping cart filled with what would appear to be a black waste bag, if anyone was driving in that area — again Berkshire Avenue and Eastern Avenue — if you could contact the Toronto Police Homicide Unit,” Ruhl said.

He said police have not yet been able to identify the victim and his focus right now is doing so so that they can inform her next of kin. He said the homicide is not so far connected to any known missing persons cases.

“This is an active and ongoing investigation and although we're in the early stages of this investigation, I felt it was necessary to release this information as we are continuing to make efforts to identify the victim as quickly as possible,” Ruhl said.

The victim is described as a light-skinned woman standing approximately five-foot-two, weighing around 118 pounds with short, dark, shoulder-length hair. She is estimated to be anywhere from 20 to 40 years of age. Police are unsure of her ethnicity so far. She was found in a long-sleeved red Armani Exchange shirt. Ruhl said she had a distinctive design on her fingernails and toenails.

Ruhl said that multiple bags were found at the site, but it was a windy day and investigators have not yet determined exactly which pieces of debris found in the area are connected to the homicide.

Officers conducted an extensive canvas of the area on Monday and are still reviewing their notes, as well as surveillance video collected from the area.

Police have released images of the victim’s nail designs and Ruhl said he is hopeful that the images will lead to a speedy identification. 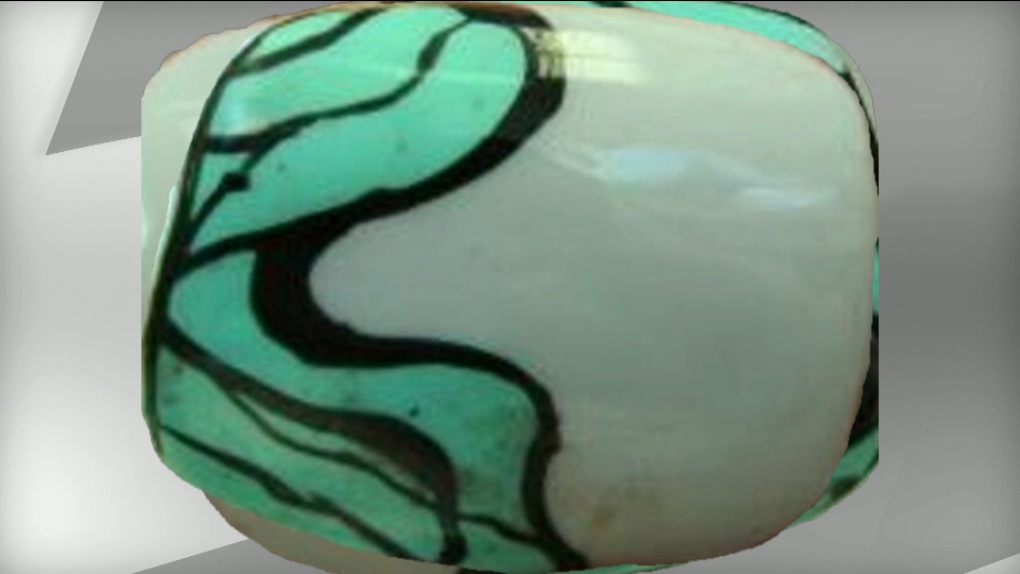 “They are a very distinct colour and pattern, as far as the fingernails and toenails, that I'm hopeful that perhaps someone in the general public will recognize those,” Ruhl said. “Whether it's a specific salon that does this particular design or if they have a friend or family member that is known to have their painted toenails and fingernails in that manner.”

Police are urging anyone with information to contact homicide investigators.

Police say a woman found dismembered in a garbage bag in Leslieville was wearing a shirt with a red Armani Exchange logo. (Handout / Toronto police)