Police seeking at least 2 other suspects in Tim Bosma investigation

After a days-long search for a missing Ancaster, Ont. man ended with the discovery of his burned remains, police announced Tuesday that a 27-year-old suspect in the case will be charged with first-degree murder.

Timothy Bosma -- a 32-year-old married father of one -- disappeared on May 6 after taking two strangers for a test drive of his black pick-up truck that he was selling online.

Hamilton Police now say that Bosma was murdered shortly after heading out for the drive.

"He was taken to a location in the Waterloo area where his body was burned beyond recognition," Det.-Sgt. Matt Kavanagh said Tuesday afternoon, just hours after police announced Bosma's death.

Dellen Millard will face a charge of first-degree murder during a scheduled court appearance on Wednesday. Millard was arrested Saturday and initially charged with forcible confinement and theft over $5,000.

"Video evidence we have now recovered shows that when Mr. Bosma's vehicle left his residence, there was a second vehicle following him," he said. "We do not know at this time how many people were in that vehicle."

Police said they believe that Bosma was targeted, but are unsure why. The exact cause of his death has yet to be determined.

On Sunday, police recovered Bosma’s truck inside a trailer that was parked at the Kleinburg, Ont. home of Millard’s mother, Madeleine.

Millard’s mother had “absolutely no involvement of knowledge of this case,” Kavanagh said.

During the week-long investigation, police have also searched Millard’s Etobicoke, Ont., home and a rural property located south of Kitchener that is reportedly owned by Millard.

On Tuesday, large tents could be seen on the farmland located in Ayr, Ont., about 25 kilometres south of Kitchener, as forensic teams scoured the property.

Millard took over as the company’s CEO after his father died late last year.

He broke a record when he was 14 for being the youngest Canadian to fly solo in both an airplane and a helicopter in the same day.

Millard’s lawyer, Deepak Paradkar, told reporters on Monday that his client was shocked by the allegations against him.

Anyone with information about the case is asked to call the police at 905-546-2100 or Crime Stoppers.

Hopes of finding Bosma alive were shattered Tuesday when police announced his remains had been located after a week-long search.

The announcement was a tragic end to a search that stretched across Southern Ontario. Members of the community plastered posters, handed out flyers across the Greater Toronto Area and took to social media in a desperate attempt to bring Bosma home to his wife Sharlene, and two-year-old daughter.

Bosma’s wife and mother both issued tearful public pleas for his return.

Peter Lowe, who has manned a Facebook page for Bosma since the Ancaster man first went missing, posted a statement on the site Tuesday: “The agony in this house is indescribable. There will be no updates from this page. My prayers are with this wonderful family.”

In a brief statement to reporters, Lowe also thanked the community for their support over the past week.

“The family has no statement to make today, so we’re just asking that you give us the same respect that you’ve given us this week,” he said.

Ontario NDP Leader Andrea Horwath, who is from Hamilton, offered condolences to the family on behalf of all Ontarians and members of the legislature.

"His wife Sharlene, his daughter, and his mother Mary and all his friends and family are grieving very much today, and I think it's important that we say we're grieving along with them," Horwath said Tuesday. 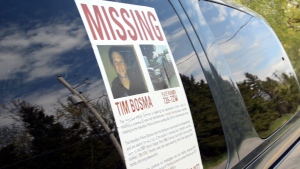