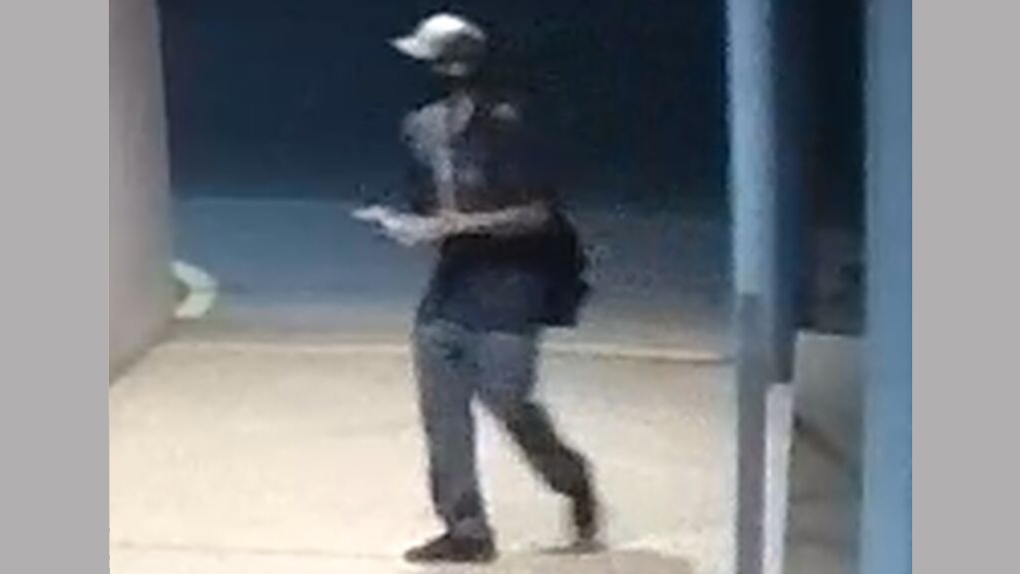 Toronto police are trying to identify a suspect in connection with antisemitic graffiti spray-painted on a synagogue in Midtown Toronto. (Handout /Toronto police)
TORONTO -

At least three spots around the GTA — including a school, a synagogue and a bus shelter— have been targeted with antisemitic messages this week alone and investigators are looking for at least one suspect.

Police were called to Beth Sholom synagogue on Eglinton Avenue West, near Winnett Avenue, at around 9:30 a.m. on Aug. 18 after graffiti was discovered.

According to police, a man went to the synagogue and spray-painted antisemitic graffiti on a wall there.

Police released a surveillance camera image of the suspect on Thursday and said they are asking for help from the public to try and identify him.

The suspect is described as standing five-foot-eight with a skinny build. He was wearing blue jeans, a dark T-shirt, a baseball cap, black running shoes, and a black backpack.

Investigators are treating the incident as a hate-motivated offence and are asking anyone with information to call police or Crime Stoppers.

The synagogue graffiti is the latest in a series of recent incidents targeting Jews in the GTA this week alone.

In a statement released on social media, Mayor John Tory said he has been in touch with the synagogue and added that such incidents are “unacceptable.”

“I've reached out to Beth Sholom Synagogue in the wake of yesterday’s vandalism to show my support for the synagogue and our Jewish community and to register with them and with the city as a whole how completely unacceptable antisemitism is," Tory said.

Coun. Josh Matlow, who represents the ward, also spoke out in a tweet.

The ⁦@bethsholomsyn⁩ was defaced with a swastika. Our office has organized for this hateful vandalism to be removed. I stand with Toronto’s Jewish community. The alarming rise in antisemitism and hate in Toronto, and globally, cannot go unchallenged. https://t.co/keAXqzYDYZ

Premier Doug Ford also weighed in, saying he stands “shoulder to shoulder” with the Jewish community.

“I've said it before, and I'll say it again: Antisemitism has no place in Ontario,” Ford said in a tweet.

On Thursday evening, Matlow posted to Twitter about reports of several homes being vandalized with antisemitic graffiti in the Toronto-St. Paul’s community.

“I’ve been in touch with the Toronto Police and they are taking this very seriously - they have our support & gratitude,” he tweeted.

Along with the hateful graffiti at Beth Shalom, there are now reports of antisemitic vandalism at several homes in our Toronto-St. Paul’s community tonight. I’ve been in touch with the Toronto Police and they are taking this very seriously - they have our support & gratitude.

Toronto police told CP24 that they received one report of a hate crime in that area.

But they cannot confirm the vandalism and are not providing further details about the incident.

At least two other incidents involving antisemitic graffiti were reported Wednesday, though investigators have not linked all the occurrences.

In one incident, a bus shelter advertisement near Bathurst and College streets that read “#Nohate against Jews,” was defaced with the words “Free Palestine” and “Zionists aren’t Jews.”

In a statement, La’ad Canada — one of the organizers of the ad — said it was part of a campaign launched in June specifically to fight antisemitism.

“It is very telling that an advertisement specifically calling for an end to hatred against Jews was vandalized with antisemitic graffiti,” La’ad Canada Director of Advocacy Sam Eskenasi said in a statement. “This campaign is about combatting antisemitism against Jews in the City of Toronto, where they have been the number one victims of hate crimes for 13 years, according to Toronto Police. This is local, it isn’t about Israel and it is shameful for the advertisements to be defaced in this manner.”

Also Wednesday, antisemitic graffiti was found on the outside walls of a public elementary school near Steeles Avenue West and Dufferin Street in Thornhill, where there is a large Jewish community.

I am saddened about the antisemitic graffiti recently found on Charlton Public School. However, I am hopeful, because we have the solution. We know that Holocaust education works and is our first line of defence in the fight against antisemitism. pic.twitter.com/JeUBJM6E4k

"I strongly condemn all acts of antisemitism. It is unacceptable and has no place in our city, "Vaughan Mayor Maurizio Bevilacqua said in a statement posted to social media.

Bevilacqua called the vandalism "disturbing and reprehensible" and said "our community will not tolerate antisemitism or hate of any kind."

On Monday Toronto police announced a mischief charge in connection with antisemitic graffiti found at Downsview Park on Aug. 5.