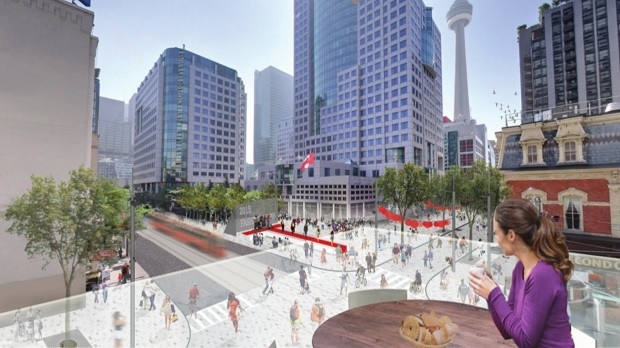 A rendition of what the transformation would look like viewing south from King and John streets. (City of Toronto)

A long-awaited plan to transform John Street into a pedestrian and cyclist-friendly corridor has been granted $40 million in city funding.

Coun. Joe Cressy, who represents Ward 20, confirmed the funding to CP24 on Tuesday.

The money will go toward the John Street Cultural Corridor project – a development planned in conjunction with the Entertainment District BIA that’s been in the works since 2009.

Speaking to CP24 Tuesday afternoon, Cressy compared the project to Pedestrian Sundays in Kensington Market where the streets turn into “a place for people.”

“Cars will be allowed but it will be frequently closed down for events,” he said.

That cultural corridor spans from the Rogers Centre to Front Street and to the Art Gallery of Ontario to Stephanie Street.

The city says the project would also reduce the width of the roadway to one lane of traffic, in both directions, between Wellington and Stephanie streets.

Back in 2015, John Street was temporarily transformed into a similarly pedestrian-friendly environment with extended patios, flower planters and reduced traffic lanes.

Cressy says the current plan will be ‘significantly different.’

Once completed, Cressy anticipates the corridor will become a hotbed for special events and outdoor festivals.

“Growth pays for growth,” he said.

“One third of the funding for this project is coming from funds secured from local developments down here and so if you’re going to add more residents and workers into an area, you need to ensure you are adding the amenities to support people living there.”

Public consultations and environmental assessments have already been completed, and official construction on John Street is expected to begin sometime between 2018 and early 2019.

“I wish this could be done overnight,” he said. “Unfortunately, when you do all the proper underground work with hydro and Bell and irrigation systems, it can take time. But you invest in the city for the long haul and that is what we are doing here.”