Six men are facing 63 combined charges in what Peel police are describing as a string of “orchestrated” multi-million dollar robberies.

According to police, the suspects made off with an estimated $6.9 million worth of property, which mostly included cell phones and tablets between March and August.

“On March 13, 2019, investigators became aware of a warehouse robbery in the area of Steeles Avenue East and Goreway Drive in the city of Brampton,” Acting Det. Stephen Sherwin said in news conference on Wednesday.

Police said that at that time a truck was hijacked by two suspects armed with a gun.

The truck driver and loaded truck were then transported by the suspects to an industrial plaza in the area of Clark Boulevard and Summerlea Road in Brampton, police said.

While at that location, the suspects transferred the stolen goods into another truck and fled the area. The victim, who did not suffer any physical injuries, was then able to contact police.

About 8,500 new cellular phones and tablets destined for stores throughout the GTA were stolen, police said. 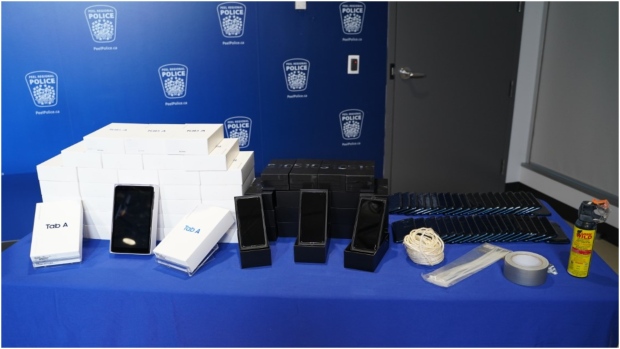 Dozens of stolen phones and tablets are seen here on display by Peel Regional Police. (Supplied)

Investigators said that months later, on July 28, just after 2 a.m., a group containing some of the same individuals attempted an armed robbery at a secure cargo yard near Steeles Avenue and Winston Churchill Boulevard in Halton Hills.

While doing so, police said a security guard was assaulted and held at gunpoint.

The individuals involved discovered that the robbery was being captured by security cameras and fled prior to entering the cargo yard, police said.

On the night of August 25, the same individuals entered a Mississauga truck yard and stole three commercial trucks. Two of them were connected to trailers, police said.

Police said that the same night, four males from the same group were arrested together as they drove to reportedly commit another gunpoint robbery at a warehouse in Mississauga.

During the arrest, investigators recovered a loaded Smith & Wesson handgun believed to be the same handgun used in the previous two robberies.

In September, investigators from the Central Robbery Bureau assisted by tactical, K-9 and uniform officers arrested the remaining males believed to be responsible for the March 13 armed robbery.

A total of six individuals were arrested and 63 criminal charges were laid Wednesday morning.

The suspects, whose ages range from 45 to 75 years of age, are facing criminal charges including counts of robbery with a firearm, kidnapping and possession of a loaded and restricted firearm. 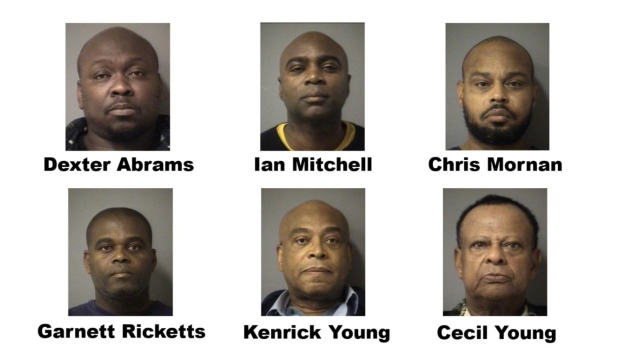 Speaking about the ages of the suspects, Sherwin added “I’d be lying if I said I wasn’t surprised that a 75-year-old man was charged.”

Police said that all suspects were known to police and that the suspects have ties to eastern and western Canada.

Police also made note of the fact that the manufacturer of the devices disabled them remotely once they were reported stolen.

Halton police and the Canadian Border Services Agency were also involved in the arrests.