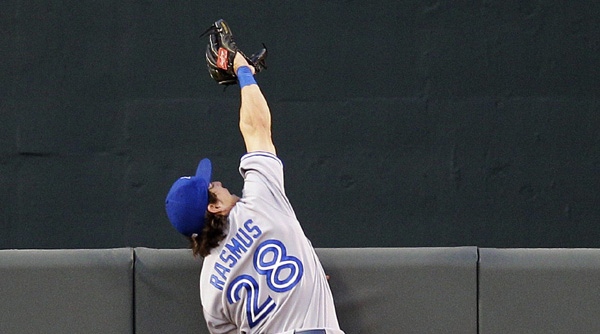 After limiting Toronto to one run on Tuesday, Baltimore became the first team this season to shut out the Blue Jays. The Orioles are 4-1 against Toronto after going 6-12 last year.

Hammel (3-0) struck out seven and walked one in lowering his ERA to 1.73 over four starts. The right-hander came to Baltimore in February with reliever Matt Lindstrom in the trade that sent Jeremy Guthrie to Colorado.

Lindstrom worked a perfect eighth and Pedro Strop got three outs for his second save in two nights as the replacement for closer Jim Johnson, who has been hospitalized since Monday with flulike symptoms.

Hammel has given up only one run in two starts at Camden Yards and Lindstrom is unscored upon in his seven appearances this season.

But Drabek got little support from the Toronto offence. Yunel Escobar struck out three times, Kelly Johnson went 0 for 4 with two strikeouts and the Blue Jays placed only three runners in scoring position.

Betemit committed an error at third base in each of the first innings, but made amends in the second by driving a 3-1 pitch over the centre-field wall to put Baltimore up 1-0.

Held hitless over the first three innings, the Blue Jays used two singles and a walk to load the bases with two outs. Hammel then threw a 3-2 fastball past Corey Rasmus for his sixth strikeout.

In the bottom half, Davis hit an opposite-field drive to left on a 2-2 pitch. Both his home runs this season have come against Toronto.

The Orioles added a run in the eighth against Jason Frasor. Nick Markakis drew a two-out walk and scored on a double by Adam Jones.