TORONTO -- The Ford government has been slammed by the opposition for letting a third wave of COVID-19 "spiral out of control" as new infections and hospitalizations surge in the province.

NDP Leader Andrea Horwath made the comments during Question Period at Queen’s Park on Tuesday, saying that Ford’s actions "walked us directly into a third wave."

Horwath's remarks come a day after a report from Ontario's science table was released, revealing that variants of concern are starting to have a "substantial impact" on the healthcare system.

The experts found that the presence of the variants are driving a rise in hospitalizations that involve younger people.

Horwath said the report and calls from medical experts make it "pretty clear" that Ontario is not winning the race between vaccines and variants and that more action needs to be taken.

"The government has allowed the third wave to spiral out of control," Horwath said. "When is this premier going to act and get ahead of the crisis that we are in?"

Health Minister Christine Elliott fired back after Horwath’s question, saying that the only solution the opposition could come up with was paid sick days, "which, by the way, we already have." 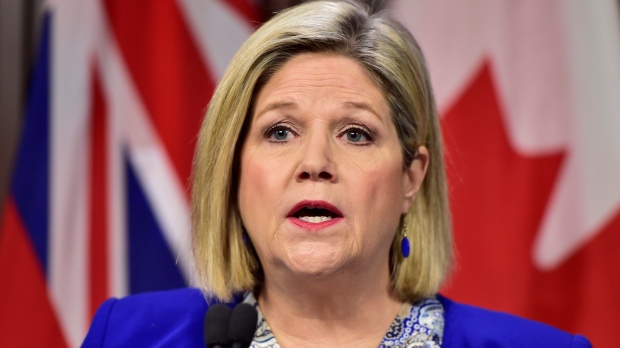 Horwath has previously suggested other measures like smaller class sizes, better COVID-19 testing in schools, and paid time off for vaccine appointments.

"410 COVID ICU patients. 46 new patients since yesterday which is a one-day record. Claiming there are ICU beds which can’t be staffed won’t help us. @ongov has lost control over the pandemic. Please stay home if you can," he said while citing data from a Critical Care Services Ontario report.

410 #COVID ICU patients
46 new patients since yesterday which is a one-day record.

Claiming there are ICU beds which can’t be staffed won’t help us. @ongov has lost control over the pandemic.

Please stay home if you can.

On Tuesday, the province reported its highest number of COVID-19-related hospitalizations since early February.

On Monday, Ford told reporters at a press conference in Niagara Falls that it was too early to make a final decision on whether the delayed March Break would still go ahead in April.

Just hours before Ford's comments, Education Minister Stephen Lecce said the date of the break had not changed and was still slated to begin on April 12.

"Within hours of each other, the premier and his education minister contradicted each other about what might be happening for April. So, the question is, why can’t the government ever provide certainty and answers for parents and kids and teachers."

Lecce responded, saying the government still plans to proceed with the break in April but will ultimately follow the advice of Chief Medical Officer of Health Dr. David Williams.

He said the government will also announce a plan in the coming days to strengthen the safety of schools when students return to class following the break.

On Tuesday, Ontario reported an additional 518 new COVID-19 cases in schools in the previous 24-hour period.

Of the 518 new infections, 440 were found in students while 77 were in staff. One was in a person not identified.

Fifty-eight schools are currently closed because of COVID-19 outbreaks.