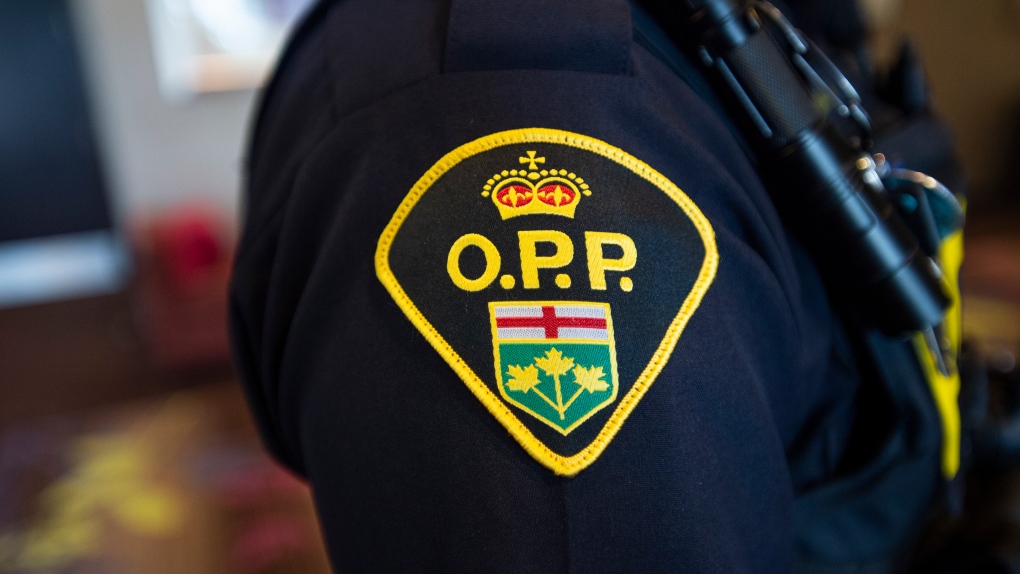 An Ontario Provincial Police crest is displayed on the arm of an officer during a press conference in Vaughan, Ont., on Thursday, June 20, 2019. THE CANADIAN PRESS/Andrew Lahodynskyj
Toronto -

Ontario Provincial Police have launched an internal investigation into the conduct of an officer after a video taken during a traffic stop surfaced on social media where he appears to voice his support to the ongoing convoy protest in Ottawa.

In the video, which was uploaded on TikTok in a post that included the hashtag #freedomconvoy2022, an officer is seen talking to the occupants of a vehicle he had pulled over. At one point in the video, the officer is heard saying, "I get what you guys are doing. I support you guys 100 per cent."

The video has been widely shared online and police have received backlash from those denouncing the occupation in the nation's capital, which entered its 17th day on Sunday with no signs of it ending.

Police have been criticized for how they are handling the "Freedom Convoy" protesters that are calling for the end of all pandemic mandates and restrictions.

In a series of tweets posted to the OPP account on Sunday, police said they are aware of the video taken Friday, which they noted "has raised concerns about professionalism and depicts opinions that are not in line with the OPP's values."

The officer in the video has not been identified, and the exact location of the traffic stop is not known.

The OPP's Professional Standards Unit is now investigating the matter.

In the tweet the OPP said it does not condone the ongoing "illegal activity" in Ottawa.

"Under the state of emergency, those who defy the law will be held accountable. Our role is to ensure public safety and keep the peace. Officers must maintain the highest standard of conduct, integrity and ethical behaviour," the tweet said.

On Friday, Premier Doug Ford declared a state of emergency in response to what he called a "siege" in Ottawa and the convoy protest in Windsor that blocked one of North America's essential border crossings.

Under the emergency orders, protesters cannot block international border crossings, the 400-series highways, airports, bridges, ports and railways in the province. Those who defy the orders could be fined and imprisoned.

Officials in Windsor declared the blockade near the Ambassador Bridge was over after removing all protesters from the area. The owner of the bridge announced late Sunday that it has fully reopened.

For those asking, the matter has been brought to the attention of OPP Command and the OPP Professional Standards Unit has launched an internal conduct investigation into this matter. We cannot comment or speculate on the outcome of the investigation.

Canada recession: It's coming, RBC predicts, but how long will the downturn last?

Canada is headed towards a moderate recession, but the economic contraction is expected to be short-lived compared to previous recessions, economists with Royal Bank of Canada predict.

One scandal too many: British PM Boris Johnson resigns

A Quebec man who fell and broke his jaw, cheekbone and a bone around his left eye while visiting British Columbia says his surgery was cancelled after he was told his home province “won't pay” for the procedure.

The Commissioner of Canada Elections' office says it has received and is reviewing information related to the allegations raised by the Conservative Party of Canada that now-disqualified leadership contender Patrick Brown's campaign violated federal election financing rules.

As concerns grow that Canada's red-hot real estate market may be starting to cool, one real estate agent in Toronto says that some homeowners in the city are becoming increasingly 'desperate to sell right now.'