TORONTO -- An Ontario woman says her neighbours' house that has been vacant for three years is now overgrown with weeds, has a racoon problem and is infested with insects.

"The last time I saw my neighbour was October 2018 so this house has been abandoned since then," Brampton woman Christine Reece told CTV News Toronto. “We don't know if this (home) is a fire hazard or if there are water leaks … we just don't know what is happening."

Reece said she noticed the townhouse beside her started have issues about five years ago, but she says three years ago the owner moved out and never came back.

The home is overgrown with weeds and bushes. Insects, including an infestation of earwigs, are now affecting her property and raccoons have moved in next door.

According to Reece, there are several holes in the soffit of her neighbour’s house where raccoons climb in and out of each day.

"I used to have raccoons in my roof, but now they have moved into the (vacant) home and left my roof and my attic, because now they know they have an empty home all to themselves," she said.

Along with weeds, there is also garbage and junk that she says she has to look at each day beside her neighbour's townhouse unit.

There are insects on the interior windows of the home and Reece said no one knows for sure what's happening inside.

Reece said her family of five is no longer able to enjoy their backyard.

"There are rats, mice, raccoons, there is everything going on over there and it's a health hazard," Reece said.

There are failure to comply notices on the door for by-law infractions, and Reece has called the City of Brampton to complain, but she's been told the homeowner continues to pay his taxes on the property. 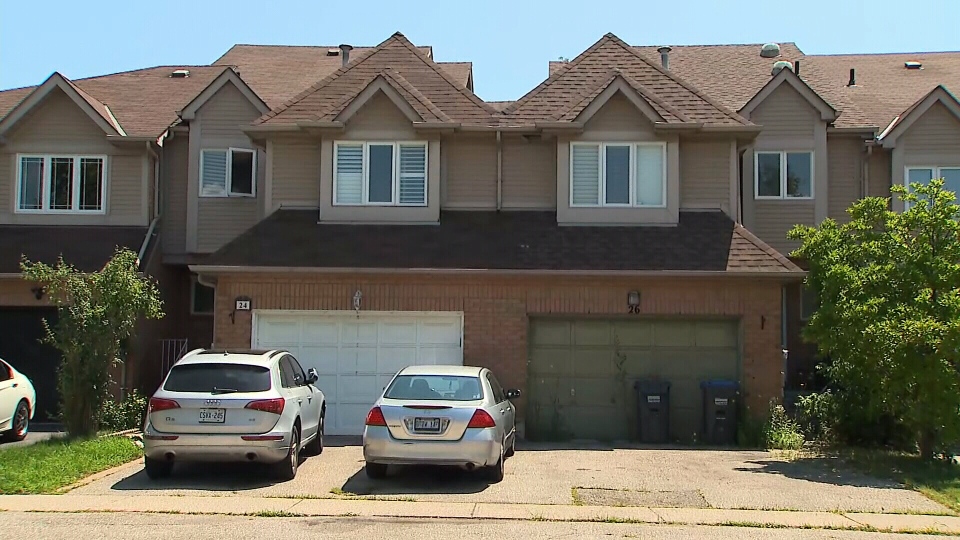 Reece said she just wants the mess cleaned up.

"I want the city to maintain it, because I’m tired of living with raccoons. I’m tired of not being able to enjoy my summer in my backyard, because at a certain time everyone has to run inside because the raccoons are coming," Reece said.

CTV News Toronto contacted city officials in Brampton who said they are "aware of property standards issues at (the property) and has laid multiple charges resulting in convictions against the property owner."

"The city continues to actively seek compliance with the property standards by-law and is currently reviewing next steps to address the matter," the city said in a statement. "By-laws are essential to maintaining a healthy and clean city, and every resident has a role to play in upholding these standards. The City of Brampton’s By-law Enforcement team is committed to keeping the city clean, safe and enjoyable for all, and takes all complaints about properties in the community seriously."

Reece said after CTV News Toronto visited her home, the city agreed to come and remove the overgrown weeds and bushes. A wildlife control company also visited the property but has so far not blocked the raccoons from getting inside.

Reece wants the city to deal with issues with the vacant home problem before animals start getting into and damaging her home.

Neighbours are also concerned that the vacant house could affect property values on their street.