Ontario is promising to make municipalities "whole," if they can't fund housing infrastructure and services due to a new provincial law.

Municipal Affairs and Housing Minister Steve Clark wrote to the Association of Municipalities of Ontario to say the province was launching a third-party audit of municipal finances in "select" communities, focused on reserve funds and the fees housing developers pay.

"It is critical that municipalities are able to fund and contract road, water, sewer, and other housing enabling infrastructure and services that our growing communities need," Clark wrote.

"There should be no funding shortfall for housing enabling infrastructure as a result of Bill 23, provided municipalities achieve and exceed their housing pledge levels and growth targets."

The government has not yet identified which municipalities would be subject to the audits but is pledging to work with the association and the Ontario Big City Mayors to come up with a list. Clark wrote separately to Toronto Mayor John Tory with the promise of an audit and keeping the city "whole."

"AMO is very pleased with the government's recognition of the need to ensure municipalities' access to revenues to support the joint provincial-municipal goal of increasing housing supply and affordability," he wrote in a statement 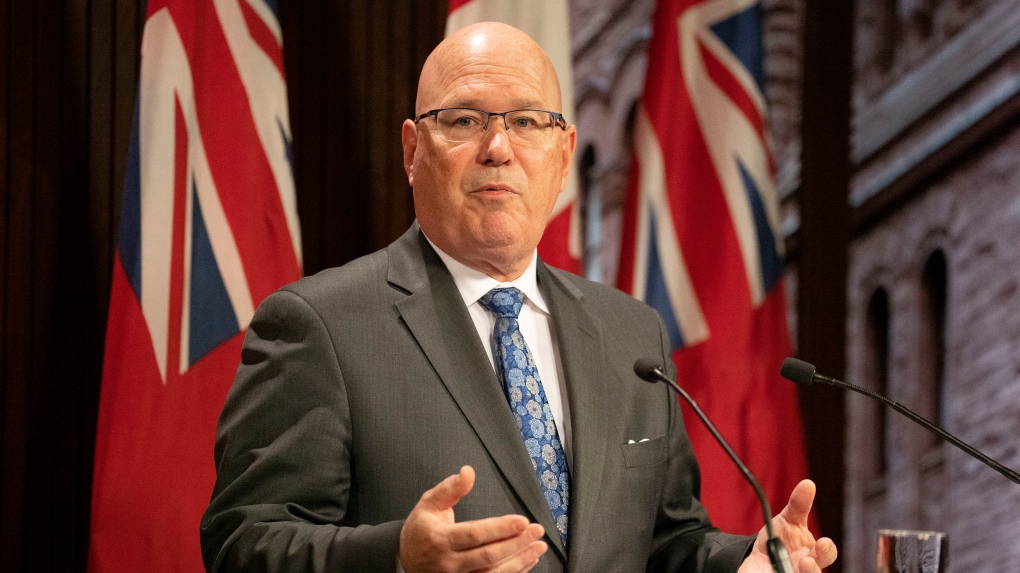 Steve Clark, Ontario’s Minister of Municipal Affairs and Housing, speaks to journalists at the Queens Park Legislature, in Toronto on Wednesday, November 16, 2022. THE CANADIAN PRESS/Chris Young

The bill passed Monday would, in part, freeze, reduce and exempt fees developers pay on certain builds such as affordable housing.

Those fees go to municipalities and are then used to pay for services to support new homes, such as road and sewer infrastructure. Communities across the province have expressed concern that they will have to raise property taxes to fund those services.

When it introduced the bill last month, the Ford government identified 29 municipalities in which the bulk of new housing will need to be built in order to reach its goal of 1.5 million new homes in 10 years. Ontario will require them to develop "pledges" of how they will meet their assigned targets. Toronto, for example, will need 285,000 new homes.

The association has said the changes to development charges will leave communities short $5 billion and see taxpayers footing the bill, either in the form of higher property taxes or service cuts.

But Clark has said municipalities have billions of development charge revenues in reserve and the additional costs on new homes must be "reined in."

Clark said that since 2010, municipal fees and taxes on new homebuyers in Toronto have increased by close to 600 per cent.

He said he hopes municipalities and the province can work together on the audit.

"We are committing to ensuring municipalities are kept whole for any impact to their ability to fund housing enabling infrastructure because of Bill 23," Clark wrote.

Clark also told Tory that Ontario would cover up to one-third of the city's operating deficit for this year, which it estimates at $703 million.

"It is critical that you use this support and the time it provides to take action to address Toronto's forward-looking operating pressures," Clark wrote.

"(We) need to have the government of Canada address its clear commitment to assist with what is an exclusively COVID-19 related shortfall being experienced in a more substantial way by Canada's largest city, with Canada's largest urban economy, Canada's largest transit system by far, and the biggest regional challenge sheltering people, including refugees," the mayor wrote in a statement.

This report by The Canadian Press was first published Nov. 30, 2022.