TORONTO -- A decision on whether schools will reopen in Ontario's COVID-19 hot zones on Feb. 10 will be announced on Wednesday, the province says.

Education Minister Stephen Lecce said in a tweet on Monday that Chief Medical Officer of Health Dr. David Williams confirmed to him and Premier Doug Ford that he will finalize his advice about resuming in-person learning on Wednesday.

"The government will provide certainty parents deserve by announcing on Wednesday the dates for reopening," Lecce said.

Ford also said on Monday that his goal is to have in-person learning resume on Feb. 10. He reiterated that his number one priority is making sure children are safe when they return to the classroom.

"I've said right from the beginning I won’t jeopardize our children for second. If it’s not safe, we aren't sending them back," Ford said. "Once we get the 'OK' from the chief medical officer of Ontario to send them back, we're going to send them back."

The regions waiting to find out if they will return to class on Feb. 10 include Toronto, Peel Region, York Region, Windsor-Essex and Hamilton.

Earlier on Monday, Lecce announced the province will offer asymptomatic testing for COVID-19 in schools across the province.

We want all students in all regions back to class.

The Chief Medical Officer of Health confirmed to Premier @fordnation & I that on Wednesday he will finalize his advice.

The Government will provide certainty parents deserve by announcing on Wednesday the dates for reopening.

"When we first launched targeted asymptomatic testing for students and staff and their households, we started in a part of the province which, at the time, had among the highest numbers of active COVID-19 cases," Education Minister Stephen Lecce said at a news conference alongside Chief Medical Officer of Health Dr. David Williams.

"I'm announcing that we are expanding this testing approach to areas, other areas of the province for schools and child-care centre settings experiencing either outbreaks or high case counts if they happen to be within high-priority communities."

The province tried its hand at asymptomatic testing in schools in the fall with some 9,000 tests processed. In doing so, they found 200 new cases of COVID-19, with under two per cent of all student tests coming back positive, according to the government. 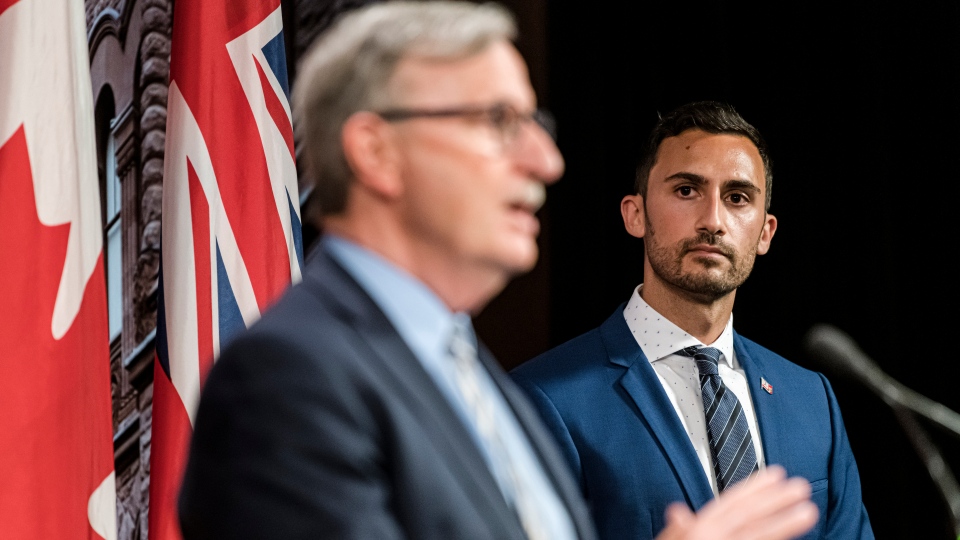 Lecce said that by identifying cases in schools early, future public health decisions regarding in-class learning can be better informed.

It will be up to the local public health units to identify which schools should conduct the targeted asymptomatic testing, which will involve both PCR and rapid tests.

The Ministry of Education says it has the capacity to process up to 50,000 tests per week, but did specify how long it would take to reach that number.

Funding for the project comes by way of the federal government’s Safe Return to Class Fund, of which $381 million was earmarked for Ontario back in August.

That funding will also provide for $62 million in summer learning supports, $60 million to support online learning, including developing digital course content and technological supports as well as $80 million to support the purchase of additional devices such as laptops and tablets.

Another $50 million will go to the procurement of portable HEPA filters and other immediate options to improve air quality and ventilation in classrooms.

The news comes as students in Ottawa, Eastern Ontario, Middlesex-London and Southwestern return to in-person learning.

In response to a question about potentially cancelling March Break to make up for lost time in the classroom, Lecce said his team has sought the advice of Dr. Williams and that the ministry would be "providing parents with a sufficient notice on that decision."

Meanwhile, schools in northern Ontario were permitted to reopen on Jan. 11 due to lower rates of COVID-19 case growth.

At the same time, the province says it is now giving eligible teacher candidates the opportunity to take on work in Ontario’s education sector to address "labour needs and high rates of staff absenteeism."

To qualify for the Temporary Certificate of Qualification and Registration, the candidate must be enrolled in an Ontario Initial Teacher Education (ITE) program, have successfully completed a portion of the practicum, be making satisfactory progress in their program, and be scheduled (or expected) to complete the program by Dec. 31, 2021.

School boards can make use of the new initiative only if there are no occasional teachers available from their current lists, the province says.

Parents across the Greater Toronto Area say they are eagerly waiting to find out if and when their children will be allowed to return to in-person learning.

"It's frustrating," Ashley Anderson, who was hoping to hear some clarity from the province on Monday, said. "I work and am a single mom and online is not exactly doing well for her."

Like all students in Ontario, Anderson's daughter, who is in Grade 3, began online learning in January as part of the provincial lockdown.

"Her education is starting to lag a little bit because I’m not capable of giving everything she needs at home," Anderson said.

Meanwhile, officials with the Toronto District School Board (TDSB) say they are prepared to safely welcome back staff and students as soon as public officials deem it's safe.

"Prior to the school year starting we've gone through all of our schools to make ventilation systems as efficient as they can. Further to that, we’ve also installed HEPA air filters in all classrooms without mechanical ventilation, so that’s already in place at a cost of $2.5 million," TDSB spokesperson Ryan Bird said.

Bird adds the board is prepared to review and implement any enhanced safety measures provincial and local health officials may recommend.