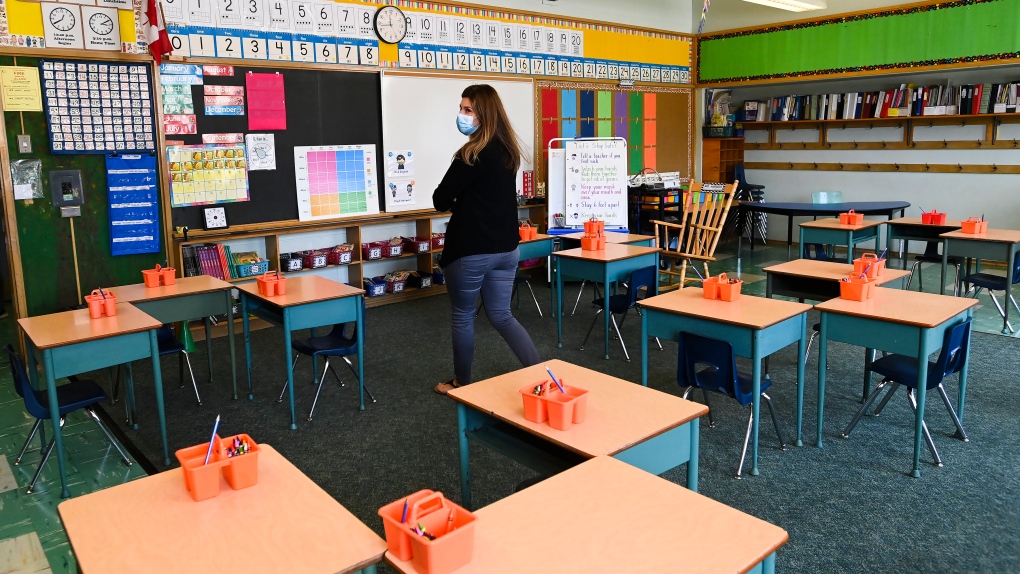 TORONTO -- Ontario should vaccinate education workers against COVID-19 over the upcoming spring break rather than waiting until school's out for summer, the group representing English public school boards said this week in a letter to the education minister.

The Ontario Public School Board Association argued in its letter to Stephen Lecce that teachers should be vaccinated as early as possible in Phase 2 of the province's immunization rollout in order to keep kids in classrooms.

"Vaccinating education workers would ensure we are supporting their health, safety and well-being, while also minimizing absences from the workplace," OPSBA President Cathy Abraham wrote in the letter. "This in turn helps keep students in the classroom."

The spring break, which was postponed this year until April 12 in an effort to keep families from travelling and potentially spreading more contagious variants of COVID-19, offers an "optimal opportunity" to vaccinate as many teachers, education assistants and other school staff as possible, Abraham said.

As it stands, teachers are set to be vaccinated towards the end of Phase 2 of the province's immunization rollout, which is not expected until school is out for the summer.

"It would make way more sense to have this happen earlier," Abraham said in an interview. "It would be beneficial for all involved if we could get them moved up the timeline for vaccinations."

She noted that the Toronto District School Board had already made a similar request.

Abraham said she has yet to receive a response to the letter, which was sent to the government on Thursday.

Spokespeople for the ministers of health and education did not immediately provide comment on the matter.

Harvey Bischof, president of the Ontario Secondary School Teachers' Federation, said his union's members are eager to get vaccinated, but don't want to hop the queue ahead of those most vulnerable to COVID-19.

He said, however, that once the elderly and front-line health-care workers get their shots, teachers should be next in line.

There are numerous reasons for that, Bischof said.

"Educators work in environments that are not allowable in most other public places in the province," he said.

"They often work in classes that are crowded, where there isn't room for physical distancing, sometimes with students with special needs who aren't able to wear masks."

And because kids are too young to get vaccinated, giving shots to teachers could help interrupt the chain of transmission, Bischof added.

Boards in one hot spot have had to shutter several schools to in-person learning because teachers were exposed to COVID-19.

In most of those cases, only a handful of teachers and students were diagnosed with COVID-19, but the Catholic board has said that strict public health measures forced teachers who had been exposed to the virus into self-isolation.

This report by The Canadian Press was first published March 26, 2021.