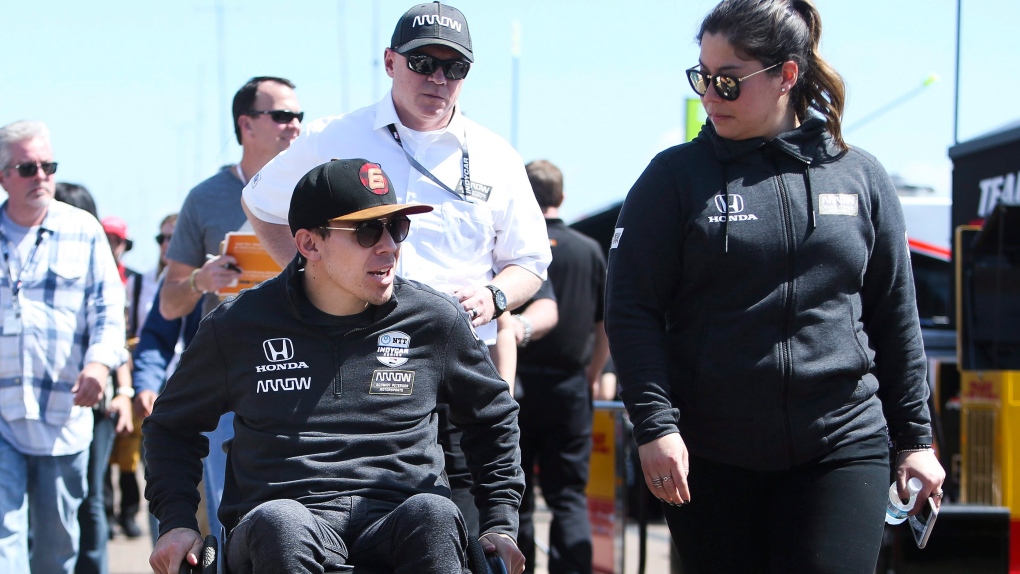 TORONTO -- Almost a year after a horrific crash left Robert Wickens a paraplegic, it took just a few seconds earlier this week for the Canadian to feel the exhilarating rush of a steering wheel in his hands.

The 30-year-old from Guelph, Ont., will lead the warm-up lap for Sunday's Honda Indy Toronto in an Acura NSX that's been modified with hand controls. His fiance Karli Woods will be in the passenger seat. It's sure to be an emotional moment.

"I was able to get a couple of practice laps in (Thursday) and it put a huge smile on my face . . . Racing is my dream, it's my passion, it's all I want to do," Wickens said.

It was his first time behind the wheel since his Aug. 19 crash.

"The most liberating part was as soon as I got into the car, got strapped in, I pushed the ring throttle for the first time and the car started creeping away. And I just went full throttle to see what it could do," said Wickens, with a wide smile. "The car's so good, that was that moment where I thought 'Yeah, I missed that.'

"It was one of those moments where I stayed full throttle for a while and then I just coasted so I could take it all in and experience it all."

Wickens was having one of the most dominant rookie seasons in IndyCar history, reeling off seven top-five finishes including a thrilling third place in Toronto at this time last year before he crashed at Pocono Raceway in one of the most catastrophic accidents in the sport.

Speeding along at close to 184 miles per hour, Wickens was trying to pass Ryan Hunter-Reay when the two cars slightly touched. Hunter-Reay's car careened into the wall. Wickens' car soared over Hunter-Reay's and into the fence, spinning around like top as it exploded into pieces, leaving just the tub that came to rest on the track.

Wickens has shared his long and arduous recovery on social media. He believes it's helped keep him from spiralling into depression. There was funny footage of racing wheelchairs in his rehabilitation centre with teammate and close friend James Hinchcliffe of Oakville, Ont.

"It's incredible what he's gone through and how he's recovered and shared his story with the world has really inspired so many people," Hinchcliffe said this week. "He really is an inspiration every day, you wake up and talk to him and all the things that he's gone through, how he's dealt with it, his mindset has been incredible."

There was touching footage of the first time Wickens stood. He surprised Woods with his latest accomplishment, reaching out to grab her shoulders for balance.

Wickens, who remembers little of the crash, has said he'd love to dance at their wedding in September.

"I can confidently say I'll be able to stand there -- and jokingly have said it wouldn't much different than if I wasn't injured in the first place," he laughed. "Hopefully we can sway a little bit, she might have to take the lead, and I'll just drag behind her."

He has lofty aspirations for his auto racing career. He won't settle for simply leading the warm-up laps for long.

"The target after the wedding is to hopefully have a trial-basis steering set up so I can get on the Honda Indy car simulator and get to work," Wickens said.

Can a car with hand controls be adapted for Indy car racing?

Mike Long, the CEO of Arrow Electronics, believes it can. He pointed to Sam Schmidt, a former IndyCar Series competitor whose crash in 2000 left him a quadriplegic. Arrow Electronics created a 2014 Chevrolet Corvette Stingray for Schmidt that is controlled with head and mouth movement and voice commands.

"We're showing off this technology because this technology could be used by anybody in the world with Robby's problem to get back on the road with a car," Long said. "So that's really what drives us."

Wickens, who isn't even a year into what he said will be a long recovery, continues to see physical improvement.

"Haven't woken up one day and had this miraculous gain," he said.

But there are small gains.

"Sometimes you don't really notice but something will be moving, and you'll be thinking 'When did that start moving?"' he said. "Luckily I haven't hit that plateau yet, hopefully I never will."

Wickens is sure to hear a roaring ovation from the crowd at Toronto's Exhibition Place for Sunday's race.

How many laps will he be allowed to drive? However many it is surely won't be enough.

"I'm trying to figure out what that penalty will be if I just kept going."