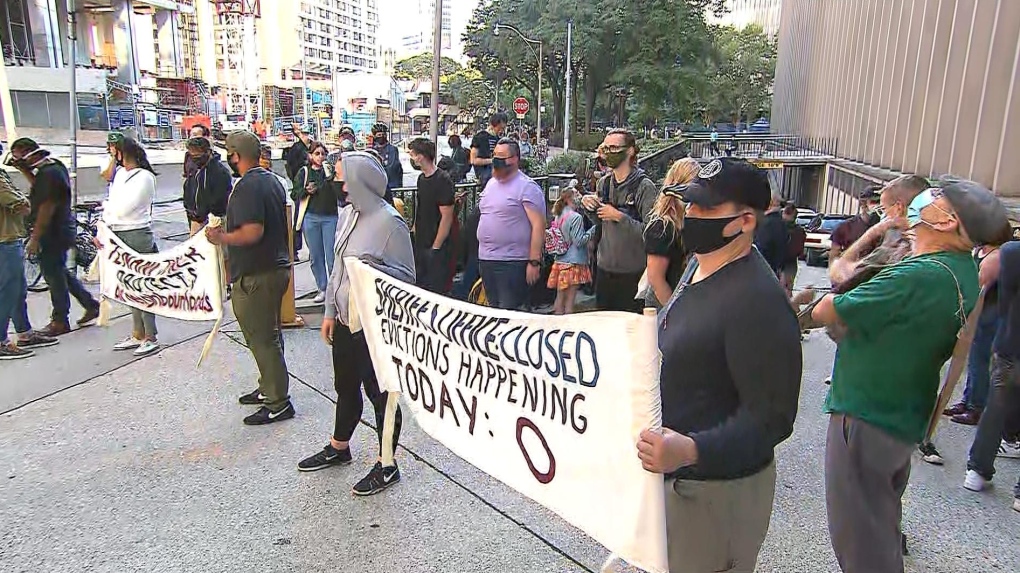 Protesters gathered downtown to ask the mayor to end evictions during the COVID-19 pandemic.

TORONTO -- Housing and tenant advocates are calling on Ontario to reinstate a ban on residential evictions that lifted Wednesday as the province's stay-at-home order expired.

They argued that losing housing during the pandemic would put lives at risk, and suggested evictions be suspended as long as provincial COVID-19 restrictions remained.

"Keeping everyone housed is one of the most important public health measures during a pandemic," ACORN Canada, an advocacy group for low and moderate-income families, said in a statement. "We know that the pandemic is far from over."

The government halted all residential evictions when it imposed the stay-at-home order amid soaring COVID-19 cases in April. While that order ended Wednesday, along with the eviction ban, the vast majority of public health restrictions remain.

Emina Gamulin, a tenant facing an eviction order, said the lifting of the ban was highly concerning.

"It's been stressful," she said, adding that a number of her neighbors are also facing eviction orders and are still without work. "For those people who have lost work, it's going to be very hard for them to catch up."

Eviction hearings have been ongoing even while the ban has been in place. The end of the ban means sheriffs can once more enforce eviction orders.

Tenant advocacy group Keep Your Rent, which Gamulin is a member of, said the end of the ban will likely result in a wave of evictions.

One Toronto legal clinic said the lifting of the eviction ban suggested the province did not have its priorities straight.

"The province's decision to now continue nearly all public health restrictions except the suspension of eviction enforcement represents a clear prioritization of landlords' financial interests over the health and safety of low-income and racialized tenants, their families, and their communities," Lawyer Benjamin Ries of Downtown Legal Services said in a statement.

Reise also suggested Toronto's top doctor could suspend residential evictions in the city if she thinks such measures are necessary to prevent the spread of COVID-19, hospitalization, and death.

But Dr. Eilleen De Villa said her power to act on the issue under the Health Protection and Promotion Act was limited.

"There's not a lot of latitude for medical officers of health," she said.

A spokesman for the ministry of municipal affairs and housing said the government has taken action to protect and support tenants, including freezing rents for the vast majority of renters and providing municipalities with $765 million to support housing and homelessness programs.

"Throughout the pandemic, the government has encouraged landlords and tenants to work together and the vast majority have done so," spokesman Matt Carter said.

This report by The Canadian Press was first published June 2, 2021.